The Lonely Island gives the pop world a “Pulitzer-y pooning” 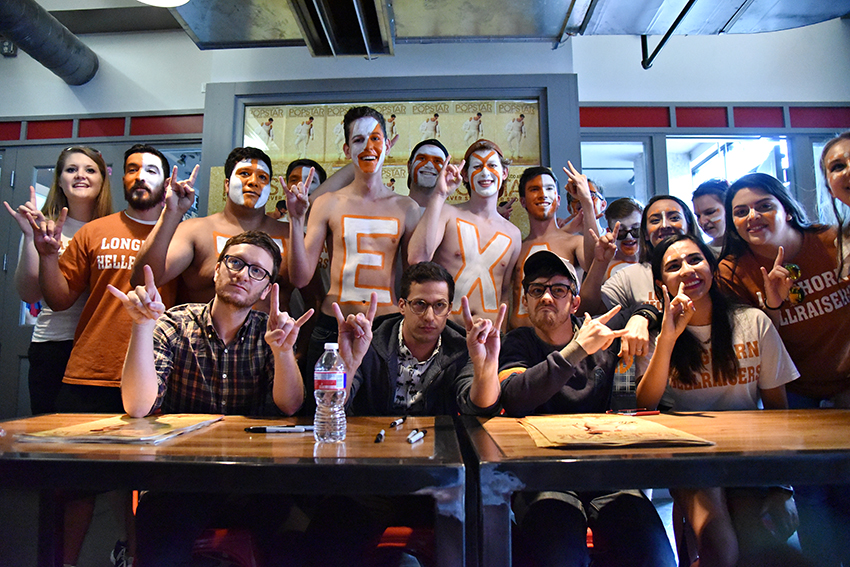 With the upcoming release of their mockumentary Popstar, comedy trio The Lonely Island embarked on a college tour to promote the film. Set to premiere June 3, the film is centered around fictional rapper Connor4Real and the release of his sophomore album. The Daily Texan met with The Lonely Island to discuss the film, Beyoncé and Hamilton.

The Daily Texan: How do you think your new UT sports chant will go over with students?

DT: What drew you to the mockumentary genre for your upcoming movie?
Jorma: We’ve been saying popumentary because that seems more accurate.
Andy: Yeah the popumentary genre feels like a newer thing. You know like Katy Perry and One Direction and Bieber and J-Lo and all these people had these tour documentaries about their lives and it’s all-access.
Andy: We wanted to make a movie that we could do songs in and that was a genre that we felt hadn’t really been explored.
Akiva: It was ripe for the lampooning.
Andy: It was lampoon-ripe.
Jorma: It was lampoonable.
Akiva: That’s all we could’ve said, the genre of pop documentary was ripe for a pooning.
Andy: Ripe for a poon.
Jorma: That’s maybe just the title of your article.
Andy: Well, don’t tell the author how to write their story.

DT: Since your next album is going to be the soundtrack to “Popstar,” how will it be different than The Lonely Island’s previous albums?
Andy: The album is the soundtrack, however, there’s a ton of songs we wrote that aren’t in the movie, so the soundtrack/album is going to be much more extensive and have a lot of cool stuff that you won’t get if you just watch the movie. It’ll be different because it’s more me-heavy.
Akiva: And there’s a few songs that maybe we wouldn’t have done from our perspective, but it’s fine from the character’s perspective. But we wrote everything on the record — they’re all our songs — but some of them don’t even have the three of us because it’s from another character in the movie. It is a soundtrack in the way that if you’ve seen the movie and you listen to the soundtrack, you’ll follow the kind of story of the movie like a musical soundtrack in a way.
Jorma: Kind of like the “Hamilton” soundtrack and equally as successful.
Akiva: Like “Hamilton,” but more successful.

DT: More controversial than Hamilton?
Jorma: Very controversial and more educational I’d say.
Akiva: More truthful.
Andy: Yeah, it’s not that watered-down “Hamilton” stuff when it comes to history.
Jorma: And more important, definitely.
Andy: More important, more Pulitzer-y.
Akiva: You don’t have to use this, but title: “Lonely Island’s Pulitzer-y pooning.”
Andy: Pulitzer-y or Pulitzer-esque?
Akiva: The Lonely Island gives the pop world a “Pulitzer-y pooning,” and then [your article is] just flying off the shelves.
Jorma: Wow, Lin Miranda is going to be so jealous.

DT: How does the album compare to Beyoncé’s Lemonade?
Andy: I would say it’s better, it’s definitely better.
Jorma: I don’t want to be hyperbolic, but it’s definitely better and more feminist.
Andy: We have less references to Jay-Z cheating on us even though he did.
Akiva: He did but we keep our mouths shut.
Andy: Yeah, we just don’t like to air our drama in the streets.
Akiva: I mean, but to be honest, he’s been fucking other people for a while now.
Jorma: Is that true?
Akiva & Andy: Other than us?
Andy: Yeah, and also never us.
Akiva: Almost 100 percent of the time he bones people besides us.
Andy: Almost 100 percent?
Akiva: So he’s been cheating on us forever, but you don’t hear us making a whole album about it.
Jorma: You can imagine how upset we are.
Andy: We should rewind, start at the perspective that we’re married to Jay-Z, the three of us.

DT: Like brother husbands?
Jorma: Yeah, bro-hubs to Mr. Carter.
Andy: Anyway, it’s better than Lemonade is the answer. You know what else is better than Lemonade? An Arnold Palmer.
Akiva: I was about to say, our album, the soundtrack is actually just called Arnold Palmer. Cause it’s like, Lemonade is OK, but what if you put a little ice tea in there? Not the rapper though, Ice T’s not on the record. Although maybe for the next Grey Album.
Andy: We’ll put Ice T verses on the Lemonade tracks and call it Arnold Palmer. We did it! We just broke the world!
Akiva: It’s going to be great, look out for that 1990-never.

DT: You guys have known each other for years, but do you remember your first impressions of each other?
Jorma: I remember seeing Andy, and he just seemed like a nutcase to me.
Akiva: Nothing specific — I just remember I looked into his eyes, and I was like, “Oh this guy’s lost. There’s nothing there.”
Andy: That sounds very accurate to what I was like.
Akiva: It’s like you know those people that you’ll talk to and you’re just like, “Wow, something’s actually wrong here.”
Jorma: Andy did get class clown out of our class of like 800 people, which is pretty good.
Andy: Yeah, the writing was on the wall. I suck.