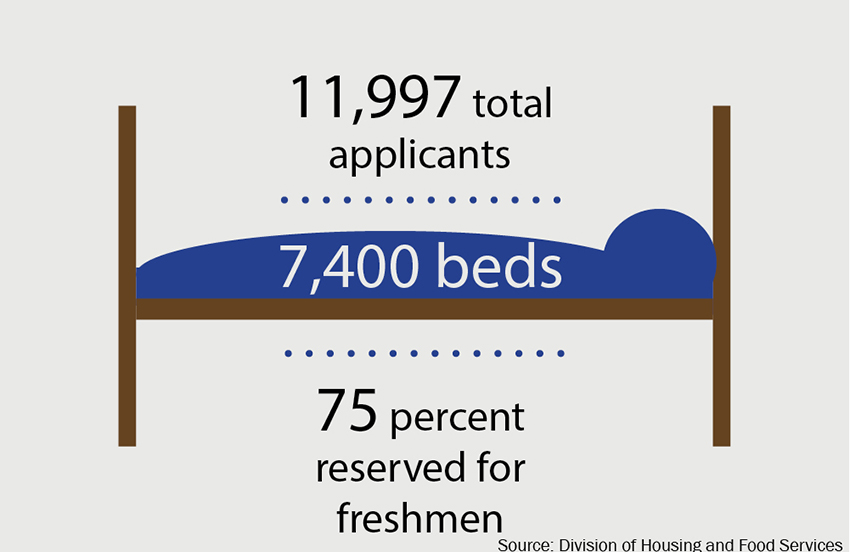 Jake Sanchez, a senior at Brandeis High School in San Antonio, will be the first in his family to go to UT.

“It was between [UT] or staying home for college, and UT was the choice,” he said. “UT’s been my number one choice since I knew how to pronounce ‘Texas.’”

But as he travels away from his family toward Austin to major in civil engineering, he may have trouble finding a new home away from home. After filling out an application for on-campus housing in mid-March, he said he has not received a housing contract, although a UT admissions officer told him he should receive one by early April.

“I want to get somewhere to live on campus,” Sanchez said. “Now I’m hoping to live in whatever’s available. I’m kind of scared that there’s nothing left.”

Sanchez isn’t alone in his predicament. As applications for on-campus housing increase, the University may not be able to accommodate every student who applies, according to the Division of Housing and Food Service. Housing spots are first-come, first-served by date of application.

To make sure they can reach every student possible, UT is closing its housing application earlier than usual, at midnight on May 4, Kothe said. In 2012, DHFS had to turn away seven UT freshmen who had applied for housing on campus, and the housing office doesn’t want to repeat the same incident, she said.

“We didn’t want to keep the housing application open when the longer it is open, the less likely it is we will be able to reach everyone,”  Kothe said.

To accommodate more students, Kothe said, some will have to be placed in supplemental housing, which are spaces in residence halls converted into living space.

“While we will work all summer long and even through the 12th class day to try to offer housing to every student who has asked for it, we may not be able to reach every student,” Kothe said. “Likely, we will use all our supplemental spaces
this year.”

“She decided to come to UT pretty late, so there weren’t any space[s] for her in the regular dorms,” Kim said. “She’s never lived on her own before.”

No matter what happens though, Sanchez said he is determined to find a place to live, whether on-campus or off-campus.

“If I don’t get a spot on campus, I think I’m going to find a roommate and get an apartment,” Sanchez said. “I don’t have any family who lives up there. I haven’t been looking into options other than [on-campus] housing.”