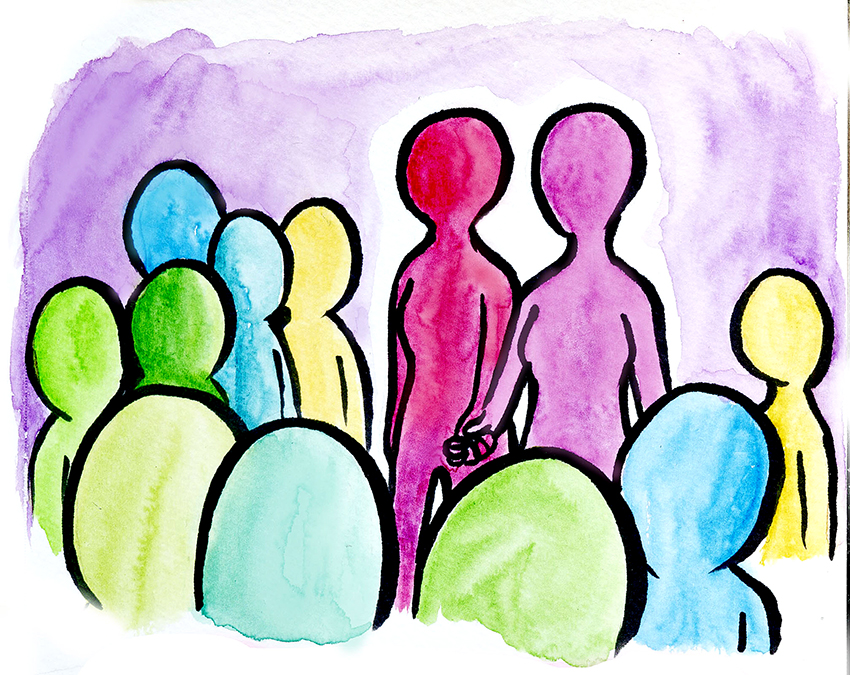 They met in the campus library, pouring over the same stack of 50 children’s books they procrastinated reading for the semester. Finals ended and they went their separate ways, but when they returned to campus, Abby and Sophia immediately started dating — and two months later, it was time to meet the parents.

Sophia, who is bisexual, hadn’t had feelings for a girl until she met Abby in December of 2013. Initially, she was uncomfortable talking about her sexuality, performing any public display of affection or telling her family about Abby.

It took a couple of months for her to realize she didn’t have to justify her sexuality to anyone.

“I’ve always prided myself on not caring what people think, and here I [was] not wanting to hold hands on the street for fear of being looked at,” Sophia said. “Now, I really don’t give a shit. If [people] want to stare and call us heathens, [they] can live the rest of [their] life thinking that and I’m going to be happy over here.”

On the way to the airport for a Valentine’s Day trip, Sophia told her mom for the first time that she was seeing someone.

When she revealed her partner was a girl, her mom immediately started crying out of shock. But by the time they arrived at the airport, her tears had stopped and she was already eager to get to know Abby.

Two weeks later, Sophia told her father. Because he is from Iran, she thought he might retain the more traditional beliefs he grew up around. But when Sophia told him, he was only occupied by one question: Was she good enough for his daughter?

“He shifted to normal relationship questions, instead of gay questions, which I’m really proud of him for,” Sophia said. “I didn’t expect that at all.”

When Abby met Sophia’s family a few weeks later, Sophia was nervous her dad would accidentally say something offensive, or that Abby would be made uncomfortable. Instead, Abby fit right in with their family, building a particularly close relationship with Sophia’s mom. Since then, Abby has joined Sophia’s family on trips to Florida, Las Vegas and Atlanta.

Abby, who grew up in a very Christian home, had a more difficult time telling her parents she was a lesbian. Because she was conditioned to think homosexuality was wrong, she avoided coming out until her senior year of high school, after a friend told her mother without her consent.

Initially, Abby’s mom didn’t welcome her girlfriends into her house, but she grew more accepting over time.

“I’d say as a whole, most of my family just kind of tolerates it,” Abby said. “I think they deny it and pretend it never happened [or] that one day I might bring a boy home.”

Sophia’s first interaction with Abby’s mom was quieter than she expected but went relatively well. During their dinner, Abby’s stepfather and brother welcomed Sophia, but her mom remained reserved. Sophia said she was terrified to censor her liberal tongue in a more conservative setting.

Abby’s grandparents, on the other hand, have maintained a welcoming and accepting relationship with Abby since she came out. Initially, Abby feared they would judge and misunderstand her, based on their generational differences.

Instead, her grandma simply told her, “We love you — no matter what. We don’t care.”

Last summer, Sophia left to study abroad in Spain. Since then, Abby’s mom has told Abby that she accepts and loves both her and Sophia.

In the U.S., Abby has maintained her relationship with Sophia’s family. Once, Sophia’s parents took her out to dinner and a Cirque du Soleil show in Austin — just the three of them.

“I don’t feel like Sophia and my mom would do something like that,” Abby said. “And it’s sad.”

When Sophia left for Spain, Abby accompanied her family to drop her off at the airport. Abby stood between Sophia’s mother and father, waving goodbye and holding back tears. In an attempt to comfort her, Sophia’s dad put his arm around her and told her one thing.