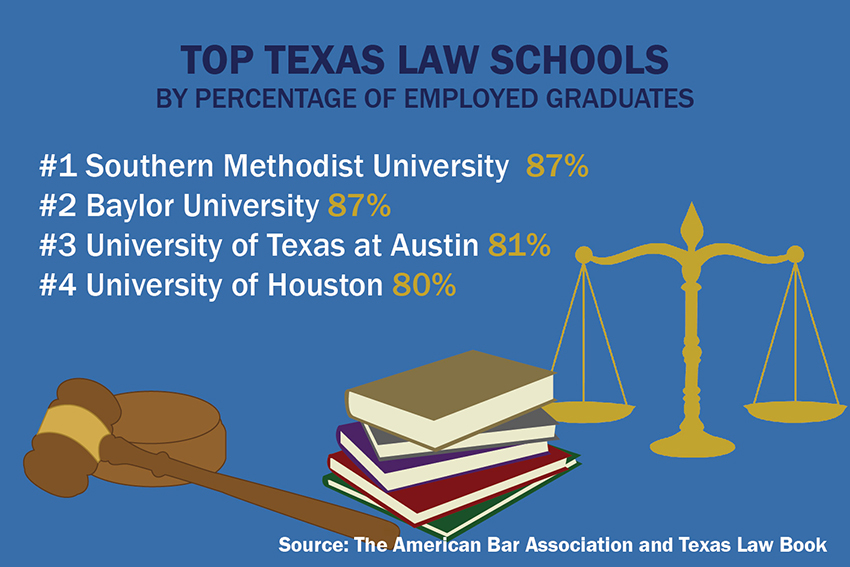 The UT School of Law had more than 80 percent of its 2015 graduating class earn full-time jobs, a higher percentage than every other accredited law school in the state except for Southern Methodist University and Baylor University.

SMU and Baylor both tied in placing 87 percent of their graduates in full-time positions, with UT coming in third place out of the state’s law schools in terms of post-graduation employment of its 2015 class.

While the numbers for some law schools may look encouraging, nearly 25 percent of the 2,072 Texas law school graduates in 2015 are currently unemployed or are underemployed, according to a recent analysis from The Texas Lawbook, a publication that analyzes issues with litigation.

“In the past, Texas has fared better than the nation just because Texas in the [economic] downturn has typically had a stronger economy,” Lawbook staff writer Natalie Posgate said. “But I think the information reflects that with the low oil prices, torts reform and so many people moving to Texas, the market just might be getting tighter and more desirable.”

Prosgate said the analysis looked at graduates who were placed in full-time professional positions that require applicants have passed the bar exam, as well as other unrelated professional, long-term jobs.

One of the reasons UT placed lower than both SMU and Baylor is because UT employed some of its graduates in law-school funded positions, including fellowships, while other schools such as SMU did not employ any, Posgate said.

The Lawbook’s analysis showed more than 13 percent of recent Texas graduates are unemployed, which is worse than in 2010, when 9 percent of Texas law school graduates could not find jobs after graduation. 2010 was also the year that most areas of the nation were hit hard with the economic downturn stemming from the Great Recession, which spared Texas in some aspects, Posgate said.

Around 3 percent of recent law graduates from Texas schools are currently working as lawyers in part-time jobs, according to the Lawbook’s analysis of recently released data from law schools throughout the state.

In a news release of law school employment data, the American Bar Association said the 205 accredited law schools it examined around the country reported that around 10 months after graduation, 28,029 graduates of the class of 2015, or 70 percent, were employed in long-term, full-time positions. The new data will be used for studying ways of improving the bar exam process, the ABA wrote.

“The section also studies and makes recommendations for the improvement of the bar admission process,” the ABA wrote in a statement.

Law student David Socol said he chose to attend UT’s law school because of its status as a top-tier school and said it has opened doors to getting internships at the governor’s office, as well as other opportunities.

“Regardless of its placement, it’s one of the greatest law schools in the state and the nation,” Socol said. “Being a part of UT law is a pretty big deal, and it’s a fantastic experience apart from all of the opportunities and advantages it gives you.”