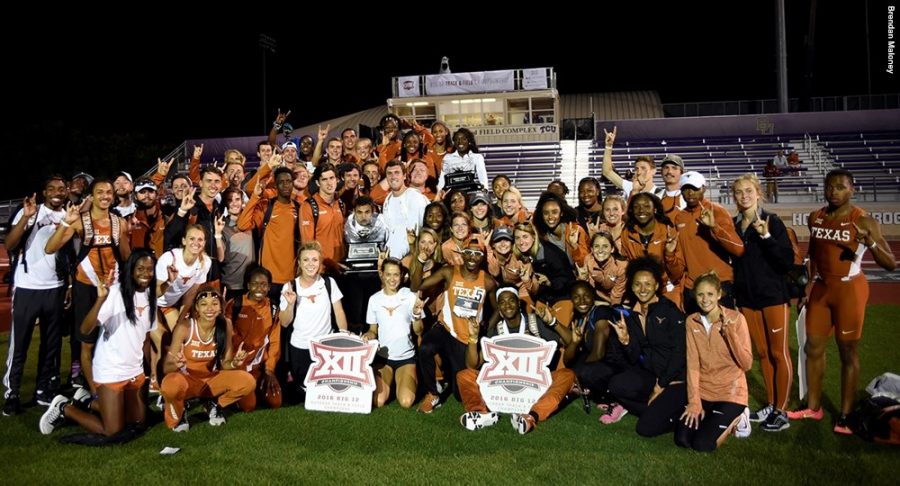 FORT WORTH —  Shades of orange, red and purple showed through the overcast sky above  the stands at the Lowdon Track in Fort Worth, Texas on Sunday. Families, fans and locals anxiously waited, clutching their heat sheets in anticipation of the Big 12 Outdoor Track and Field Championships.

Sophomore Caitland Smith exploded out of the blocks in lane five, rounding the curve to senior Courtney Okolo, who took an instant lead. Whispers from the stands of “Texas’s got it” were heard before she passed to the third leg, freshman Zola Golden. Anchoring the team was senior Morolake Akinosun — who dominated the last straight, crossing the line in first with a time of 44.05 seconds, leading second-place Oklahoma by 0.49 seconds and helping the Longhorns make history.

Hours later, both the men’s and women’s teams stood atop the Big 12 championship standings, making Texas the first school to ever sweep back-to-back conference titles.

“At a moment like this, seeing both the men and the women win — nothing else matters,” Okolo said. “Indoors sucked because I couldn’t be happy since the boys didn’t win. This just shows how well we work together.”

TCU fans were on edge during the men’s sprint relay, knowing their men had the fastest seed time entering the meet. The highly anticipated win was questioned as the men took the back straight. Fans sat on the edges of their seats, screaming as the runners rounded the curve and passed to their anchors.

Texas junior Aldrich Bailey Jr. was just a step behind TCU, but with thirty meters left, he surged forward, grabbing the lead for a historical finish. Texas had won the men’s sprint relay for the first time since 2003.

“Honestly, I should’ve never been neck and neck with TCU,” Bailey said. “It was my fault cutting Zack a step and not coming out strong enough. I just tried to stay calm because I knew I was better.”

“I didn’t execute my race the way I wanted to,” Okolo said. “I still have more races to run, so it’s more about getting it right at the right time.”

“You can’t say enough about Morolake,” head coach Mario Sategna said. “She’s proven [herself] not just at the conference level but also at the national level, and she will continue to flourish even post-collegiately.”

“The 5k was really hard,” Raines said. “This was the first time I had ever done the 10k/5k double, but I really wanted to defend my title and get that win for Texas.”

The top 48 people from each event will now compete in the NCAA West Preliminary Rounds in two weeks to compete for spots in the NCAA National Championships. Many Longhorns had already claimed their spots going into the Big 12 meet.

“The vision of our program is to be complete across the board,” Sategna said. “If you look back to two years ago, the women were being so dominate. They are training partners every single day and it just shows how success breeds success.”