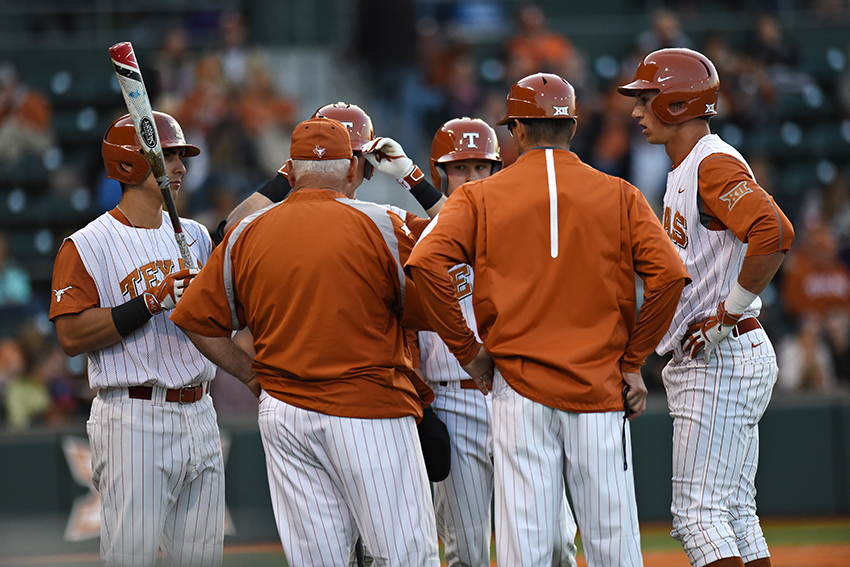 “Baseball is a cruel mistress.”

Now former Longhorn head coach Augie Garrido uttered that phrase more than a few times over the course of the 2016 season and that adage proved true on opening night.

Texas struck out 11 times and lost to University of Nevada, Las Vegas 4-3 in extra innings thanks to an eighth inning misplay by sophomore right fielder Patrick Mathis that tied the contest.

The plague of strong pitching squandered by slow offense and defensive iniquity would never go away.

“We’re making errors or bad decisions at the perfect time for the other team,” junior center fielder Zane Gurwitz said following a tough 2–5 stretch over spring break. “That’s something we can fix. It’s within us. These teams aren’t any more talented or better than us.”

Gurwitz was right about one thing. The Longhorns never seemed to get the lucky bounces necessary to win close games. A dropped ball here, a tough call on a third strike there, an errant throw by an otherwise reliable fielder — it seemed like Texas was in a stretch of hard luck.

But it never stopped.

“We’ve given away 11 games,” Garrido said in the wake of an 8–12 start — Texas’ worst mark through 20 games in over a decade. “We’ve given them too many opportunities, too many outs within the framework of the inning.”

But they never did.

Texas ended the regular season with a 3–11 record in one-run games. The Longhorns just weren’t good enough to get the job done.

Freshman closer Chase Shugart, who had his fair share of struggles, showed flashes of major league potential with his mid-90s fastball and filthy slider. The sophomore outfield duo of Travis Jones and Mathis could make for a championship-winning heart of the order.

Heck, there were even times when it looked like the Longhorns could make a conference tournament run for a postseason spot, like when Texas won a pair of series against Big 12 powerhouses TCU and Texas Tech.

“We are starting to see experience that we didn’t see earlier,” Garrido said prior to his team taking two out of three against the then No. 11 Red Raiders in late April. “[They’re] not the same group of guys [they] were 37 games ago.”

But the old culprits of shoddy fielding and weak hitting returned. The Longhorns lost eight of their final nine conference games after that and stumbled into the Big 12 tournament as a lowly seventh seed.

Texas entered the tournament with similar prospects in 2015 and won, but 2016 was different. The Longhorns scratched out dramatic victories against Oklahoma State and Texas Christian University to qualify for the semifinals, but were eventually dismissed 8-2 by the Big 12 tournament champion Horned Frogs.

The 2016 season, fittingly, ended just as it began. Not with a bang, but with a whimper.