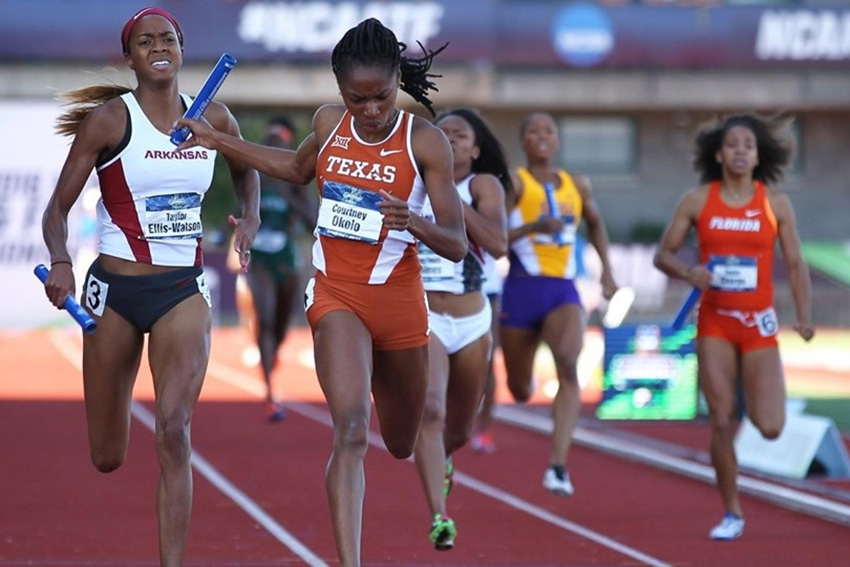 The Longhorns looked ready to head to the top after the NCAA Indoor Track and Field Championships ended in March. The men missed a team trophy by three points, and the women took home fourth overall.

“We’re going to use those things to steamroll into outdoor,” head coach Mario Sategna said in March.

Texas channeled that momentum and swept the outdoor Big 12 championships in May. But the hot streak came to an end this week at the NCAA Outdoor Championships in Eugene, Oregon. The women finished in fourth place, while the men finished 36th.

The women made history on their road to nationals. Senior Courtney Okolo became the first collegiate woman to break 50 seconds in the 400-meter dash at the LSU Alumni Gold invitational in April. Her time of 49.72 seconds became the second fastest in the world this year.

However, the men’s push towards nationals took a hit when junior Aldrich Bailey suffered an apparent hamstring injury at the West Regional preliminaries in May. The two-time Big 12 champion did not travel with the team to Oregon.

“He felt his hamstring tighten up on the backstretch and he did the right thing [sitting out],” Sategna said in May. “None of those other runners on the 4×4 will question that because they know what he’s about.”

Still, the Longhorns secured 23 total entries for the outdoor championships.

Texas’ men felt Bailey’s absence early and often — especially in the 4×100-meter relays and individual races. The team failed to qualify for finals in both events.

Junior Senoj-Jay Givans gave the Longhorns a glimpse of hope as the only male to make it to finals. However, he fell short in the 100-meter competition, taking third place with a time of 10.25 seconds.

“It kills me that I didn’t win,” Givans said. “I didn’t compete at indoors [and] I lost the first two months to injury. To come around in the shape where I know I could have won it if I had executed the way I should have, it really hurts to know I didn’t do so.”

Although the men disappointed, women’s seniors Morolake Akinosun and Okolo racked up points in their final outing in burnt orange.

Okolo won her fourth individual title in the 400-meter and led the Texas 4×400-meter relay to its 10th victory in the event on the final stretch. Akinosun took third overall after coming into the meet with the top time for the women’s 100-meter.

Okolo, Akinosun and senior Ryan Crouser’s Texas careers are over, but the trio will compete for spots on the USA Olympic team this July. Givans and junior Chrisann Gordon also hope to land spots on the Jamaican Olympic team.

The seniors came up short in their final run as Longhorns, but they made their mark during their time on the 40 Acres.

“It’s been amazing,” Akinosun said. “I really fell in love with The University of Texas. I’ll be sad to leave when the dust all settles and I realize my time here really is done.”