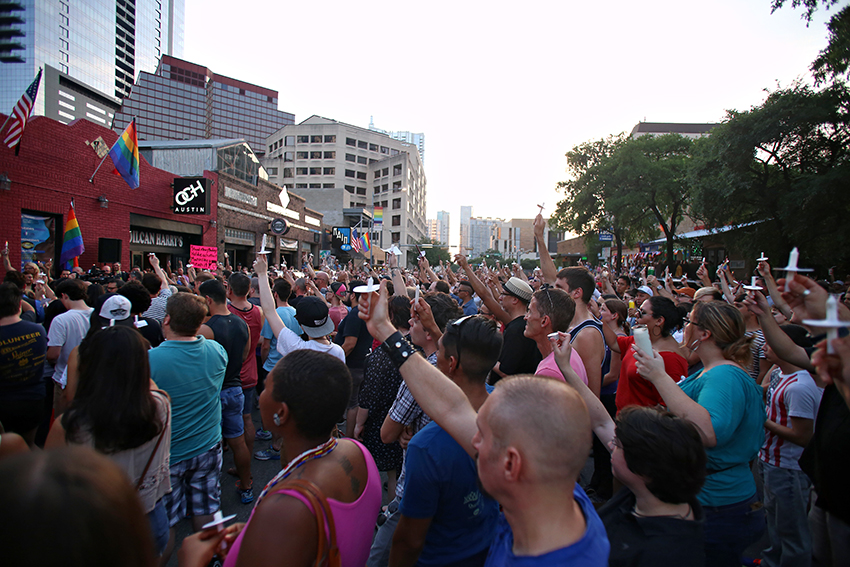 At the intersection of 4th and Colorado streets, in front of Rain, a gay nightclub, a community vigil was held Sunday night to honor the victims of the Orlando, Florida shooting, which happened early Sunday morning.

Fifty people were killed and 53 were injured in a mass shooting at Pulse nightclub, making the mass shooting the deadliest in the country’s history.

Rain, a venue that is inseparable from Austin’s history of gay rights advocacy, set the scene for the mayor, gay rights activists and other politicians to speak out in support of the LGBT community.

Mayor Steve Adler said all thoughts and prayers were being sent to Orlando from Austin, the city with one of the first mass shootings in the country.

“This kind of thing can happen anywhere, and it happens everywhere,” Adler said. “When that happens, we must gather together as a community to shine lights on the events to make it clear that Austin, Texas is no place for hate.”

Adler said Austin is a welcoming place for the LGBT community.

“As your mayor and ally, I want you to know that I love you and do not be afraid in Austin, Texas,” Adler said.

Assistant Chief of Police Frank Dixon said when he woke up and turned on the news, he was repulsed by the senseless hate.

Dixon said he was inspired to see people come together in a time of tragedy and believes it should happen on a daily basis.

“We are committed to keeping you safe,” Dixon said. “Stay vigilant, and if you see something, report it.”

Jimmy Flannigan, the former president of the Austin Gay and Lesbian Chamber of Commerce, who co-sponsored the event, said standing together is not enough.

“It is not enough to make a statement on the sidewalk, we have to make our statement in the ballot box,” Flannigan said. “I will not go back into the closet at the force of a gunman.”

Chuck Smith, CEO of Equality Texas, said he had cried today more than he has cried in his entire life.

“The battle to end violence against the LGBTQ community is far from over,” Smith said.

In the midst of the vigil, a small group of people walked by and yelled insults in protest. The crowd nearest to them began chanting “love” in response.

Meghan Stabler, board member of the Human Rights Campaign, said hate and terror are not that different.

“Hate and terror are two sides of the same coin,” Stabler said.  “Hate is motive, terror is the outcome.”

Stabler said hatred and intolerance cannot deter anyone from being themselves.

“Being out is an act of success, an act of love, and an act of bravery,” Stabler said.

Mark Madrid, president and CEO of the Hispanic Chamber of Commerce, said distance does not matter when a community needs support.

“Although Orlando is a thousand miles away, tonight it could not be closer,” Madrid said.

Paul Huddleston, president of Austin Pride, said those who lost their lives should be celebrated.

Huddleston led the crowd in the chanting of “We’re here, we’re queer, get used to it,” to end the vigil.