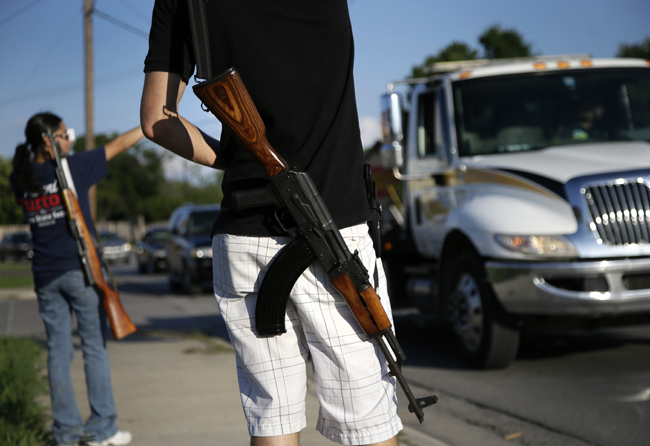 If you live in Texas, you have probably been told that gun control is pointless — criminals will always have ways to find guns because they’re criminals, so the only way to combat gun violence is for non-criminals to also have guns.

This argument is flawed in more ways than one.

Gun control won't make it any more difficult for law abiding citizens to purchase firearms — similar to how drunk driving laws don’t affect the rights of sober drivers. Any person who can safely and responsibly own a gun should be able to pass a criminal background check, mental health screening and have the patience for a waiting period.

Currently, Texas has no waiting period to purchase a firearm and does not require background checks when purchasing from private sellers. Federal law often prevents law enforcement from accessing mental health records of those purchasing guns. Additionally, gun laws in Texas are only becoming more permissive with the passage of campus and open carry in the 84th legislature.

The idea that criminals commit crimes with illegal guns is a widely-held and dangerous misconception. In fact, 82 percent of guns used in mass shootings over the past three decades were purchased through legal means.

On July 31, 2009 Nidal Hasan legally purchased a pistol at a gun shop in Killeen. Three months later, he used that gun to kill 13 people at Fort Hood.

James Holmes, the man who killed 12 people at a movie theater in Aurora, Colorado, legally purchased multiple guns and over 3,000 rounds of ammunition in the months leading up to the shooting, even though Holmes was seeing a psychiatrist and had documented mental health issues.

Just this week, 49 people were killed and 52 more were injured in the tragic shooting at Pulse, a gay nightclub in Orlando, Florida. This massacre, which is now the most deadly mass shooting in U.S. history, was carried out with weapons that were legally purchased by Omar Mateen, a man who had a history of domestic abuse and had been investigated by the FBI for terrorist ties.

The list of preventable shootings like these goes on, yet the extremely lenient gun control laws in the U.S. don’t change.

Even when background checks do occur, the agency responsible for these checks, The Bureau of Alcohol, Tobacco, Firearms and Explosives (ATF), is notoriously understaffed, underfunded and ineffective. Issues within the ATF are especially concerning when considering the matter of default proceed — a rule that gives the ATF only three business days to conduct a background check before a gun is sold regardless of whether or not the check has been completed.

ATF is also responsible for regulating firearms dealers, which they are equally ineffective at doing. A 2010 Washington Post investigation found that federally licensed dealers are only inspected once a decade. In 2011, only 62 percent of dealers inspected were found to be in compliance with federal law. That year, the ATF took action against 4,056 dealers, but only denied the renewal of 71 licences. Even more disturbing is the fact that 57 percent of firearms traced to crimes can be linked back to just one percent of gun stores — yet those stores remain in operation.

The issue of gun violence is obviously complex, and often painful to discuss. Yet in the wake of the Orlando tragedy, and the approaching 50th anniversary of our University’s own tower shooting, it is necessary to address ways to prevent future deaths. Will gun control laws stop all gun violence? Probably not. Does this mean it is pointless to enact policy that will stop a large percentage of it? Definitely not. Perhaps it is time to stop hiding behind blanket statements such as “criminals will still find guns,” and instead find solutions to one of our nation’s biggest problems.

Vera Bespalova is a psychology junior from Houston.