Ibeh can bring ‘intriguing’ defensive skills to the NBA 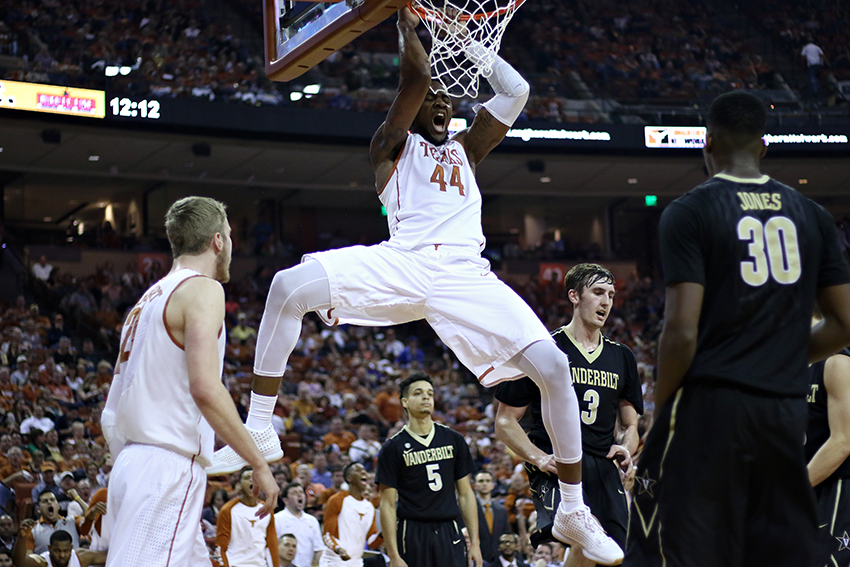 The seats aren’t designed for 6-foot-11, 261-pound centers. His nearly 7-foot-6 wingspan doesn’t help his cause for comfort either.

“Being as tall as I am, hopping from plane to plane, and all the traveling — I don’t really like it,” Ibeh said.

But Ibeh may find himself traveling more in the near future.

Thursday’s NBA draft is approaching quickly. Guard and former teammate Isaiah Taylor made headlines for his decision to enter the draft and forgo his senior year, but there’s been no shortage of interest in Ibeh as an NBA prospect.

Dan Fox, the director of scouting for EV Hoops, said Ibeh will likely be in a uniform during the NBA Summer League.

EV Hoops is an independent scouting company based in Philadelphia that sells their service to NBA teams.

“If Ibeh doesn’t get drafted, his agent’s phone will be blowing up,” Fox said. “He’ll be in [NBA] Summer League without a question.”

The NBA Summer League is a July tournament where both drafted and undrafted players compete.

While drafted players are likely to have a roster spot, undrafted prospects can earn a training camp invite with a strong showing.

Ibeh has worked out for six NBA teams this summer.

Flashy numbers were never a part of Ibeh’s game during his time at Texas. He averaged just 4.1 points, five rebounds and two blocks as a senior in 2015-16.

But beyond the stats, Ibeh’s skills become clear; his quickness, leaping ability and defensive IQ make him an appealing prospect for NBA teams.

“There’s something very unique about how he naturally grasps the center position defensively,” Fox said. “When you add in his physical tools, there’s something so intriguing to work with.”

Ibeh knows defense is where he can earn his money at the next level — he earned Big 12 Defensive Player of the Year honors last season.

But, Ibeh is working to add strength and cut down on his fouling issues.

But Ibeh’s game doesn’t come without question marks. He failed to find a consistent offensive game at Texas, relying on teammates to set him up for easy baskets. Ibeh also struggled from the free-throw line, shooting just 43 percent for his career.

Fox said Ibeh’s offensive limitations could be one of the biggest obstacles he faces in hearing his name called draft night.

“If I was a betting man, I’m betting he doesn’t get drafted,” Fox said. “He definitely has a chance though.”

Ibeh said he’s anxious for the draft process to finish so he can get back to playing basketball instead of going through drills at team workouts.

Whether he’s selected on Thursday night or signed later as an undrafted free agent, he’s ready to show off his skills at the NBA Summer League this July.

“I’m really excited,” Ibeh said. “I think [games] are more of the atmosphere I fit in over three-on-three and two-on-two stuff. I think that’s where I can really show what I can do.”