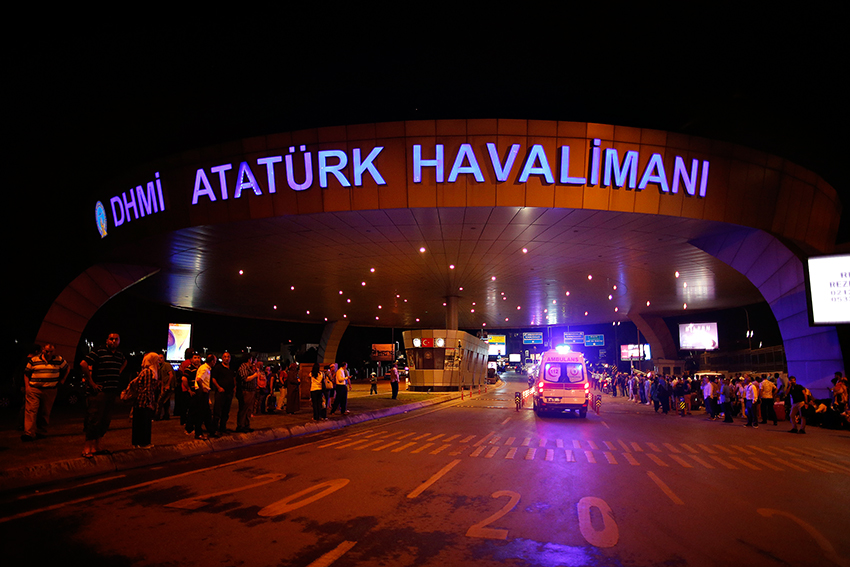 While waiting for his flight, Cade Edwards fell asleep at the Starbucks of the Istanbul Ataturk Airport. When he woke up, it was to the sound of people screaming.

The radio-television-film junior and human development and family sciences junior Kyler Heintz were headed to Cairo, Egypt when they found themselves in the midst of a terrorist attack.

“We turned to see people running out of a security checkpoint that was maybe 50 yards away from us,” Edwards said. “Suddenly 5 or 6 gunshots went off and people screamed. We grabbed our carry-on bags and began running. Maybe 30 seconds after we started running, a loud explosion went off. The ground shook. We began to run faster. After about five minutes, the scene seemed to have calmed down.”

However, the two were not done running yet.

“A wave of people started running towards us,” Edwards said. “I thought they were getting chased or there was another bomb. We began running again, through shops and restaurants. An employee motioned for us to hide in the back closet of a store. Us and about 25 other people ran into a closet. We were in there for about 10 or 15 minutes. Another employee came into the closet to let us know the coast is clear.”

Afterward, Edwards and human development and family sciences junior Heintz made their way to a terminal. Approximately 20 minutes later, people started running again. The two ran with the crowd into another terminal and hid underneath a desk for about an hour until everything settled down and they were told to evacuate the airport.

Once the chaos had ended, they left through passport security, which had been one of the scenes of the explosion.

“[The area] was a complete mess,” Edwards said. “Hundreds of people were trying to get out of this place and we had to go through this one checkpoint. People were screaming and pushing. People were still scared and crying. The walls and ceiling were completely destroyed. Glass was shattered and debris was scattered everywhere. I looked down as we were walking out and saw a bunch of newspapers covering up blood. There was a trail of blood that lead out of the airport. This is where I realized a lot of people were killed.”

Edwards said he hadn’t processed that he was at the scene of a terrorist attack until he was able to speak with his mom, who was unaware of the attack before Edwards called her. After Edwards explained to his mother what happened, it suddenly occurred to him what he had just experienced and he began to cry and shake.

The attack involved three suicide attackers who bombed the airport on June 28, leaving more than 40 people dead and over 230 wounded, according to BBC News.

It began when two gunmen opened fire at a security checkpoint outside of the airport, which is known to be one of the busiest in Europe, according to The New York Times. The two attackers, wearing bombs on their vests, then detonated themselves. The third attacker did the same in the airport’s parking lot.

This attack follows a number of similar incidents that have occurred in Turkey this past year, such as a suicide bombing this past January in Istanbul, a bombing in the country’s capital, Ankara, in February followed by another bombing the next day in Diyarbakır.

Four UT students studying abroad, including Edwards and Heintz, were reported as safe by UT.

Although no group has claimed responsibility yet, government officials are assuming the Islamic State of Iraq and Syria (ISIS) conducted the attack.

Matthew Chovanec, Middle Eastern languages and cultures graduate student, said ISIS might have caused the attacks because Turkey closed off its borders to Syria in an attempt to stop ISIS recruits from traveling and joining the group. However, Chovanec said there may be another reason as well.

“These attacks were probably a political response to Turkey’s changed stance toward ISIS in recent months and an attempt to further weaken and destabilize the country,” Chovanec said. “If you look at the fact that ISIS has not claimed responsibility for recent attacks, you can see how it is hoping to target the Turkish government without losing popular support among segment of the Turkish population who may be sympathetic.”

Petroleum engineering graduate student, E.A., who is from Turkey and wishes to remain anonymous in order to ensure his safety, said the country was facing a similar situation when he used to live there. E.A., who has family currently in Turkey, also believes ISIS could be responsible for the attack because of the history ISIS has in the region.

“People in my country know [ISIS] is not a Muslim organization because Muslim faith forbids killing innocents,” E.A. said. “They killed lots of Muslims and people from other religions. In my opinion, the only thing they care about is to bring fear to people and make sure everyone is scared of them.”