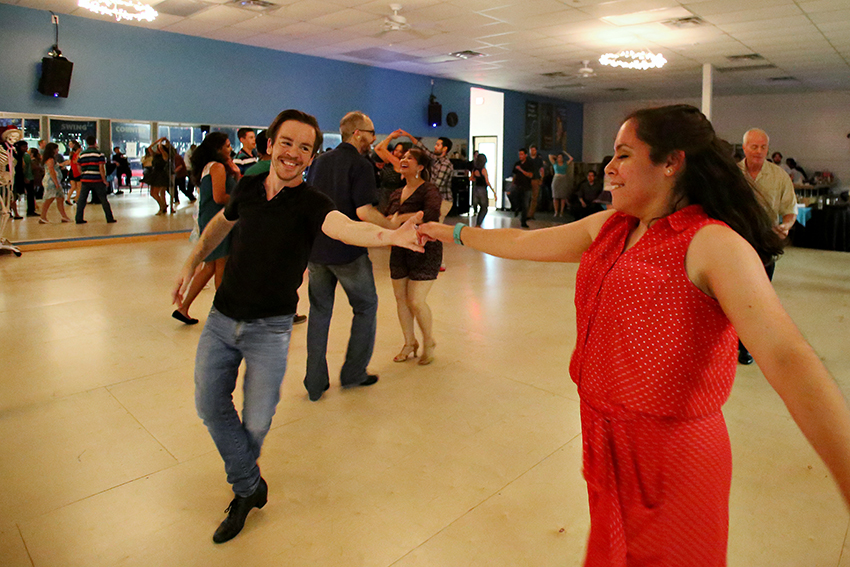 Jordan Madrigal entered UT hoping to continue his father’s legacy in the McCombs School of Business. Instead, he found his passion on the dance floor, moving in tune with the rhythm of salsa music.

In 2011, Madrigal became a member of Longhorn Salsa, a dancing club at UT. He was later promoted to be the club’s vice president and also offered free private lessons to students.

Soon after graduating with a degree in advertising, Madrigal joined Austin Inspired Movement, a dance company that teaches Latin dance classes, as the business manager and as a teacher specializing in salsa and bachata. Madrigal said the impact that dance had on his character persuaded him to dedicate himself to teaching full-time.

“It wasn’t until I saw the transformation in myself as a person that dancing really started to click,” Madrigal said. “I thought, man, ‘This has got to be passion when your whole life is being changed by it.’”

Madrigal first began dancing at 16 years old, trying out hip-hop at his high school in Waco, Texas. When he transferred to UT from UTSA, he changed his major from accounting to advertising and focused on his salsa classes.

Madrigal said he enjoys dancing because it brings human connections that cannot happen anywhere else. Through different rhythms and moves in Latin music, he said dancing serves as an exotic mix that makes people want to explore the culture behind it.

“It is so addicting and infectious to me, hearing those beats, and then, through me, my partner can experience what I’m feeling,” Madrigal said. “From a musical standpoint, Latin music is the only music that has a mix of instruments very unique to the culture itself.”

“My dad really assimilated when he went to UT,” Madrigal said. “In his mind, he felt that if he sounded Mexican he wouldn’t be able to get a good job. For me, [salsa] was an exploration of my culture that I was never really introduced to.”

Demola Fawibe, one of Madrigal’s students, said he started learning salsa last October and wanted to take private lessons with Madrigal to learn at a faster pace.

“I would like to become a great dancer, which requires time, effort and investment,” Fawibe said. “[Madrigal]  focuses on technique, ideas for new movements and making sure my partner is comfortable.”

Fawibe said his private lessons help him assimilate to the music and feel comfortable as a dancer.

“[Madrigal] is the one I found the most compatible with me in terms of what I want to learn,” Fawibe said. “Dancing is a good mental challenge and a great way to socialize and meet people. I do it for the exercise and for the joy I get when I’m dancing.”

Madrigal said one of the most rewarding aspects of dance lies in his teaching and that he sees the best improvements when his students are dedicated to learning about Latino culture.

“When you see somebody grow, it makes you proud to do what you do because you improved somebody’s life over time,” Madrigal said. “I love how they feel the music. That’s what makes it amazing.”