Officer who shot sniper remembered by daughter as a family man 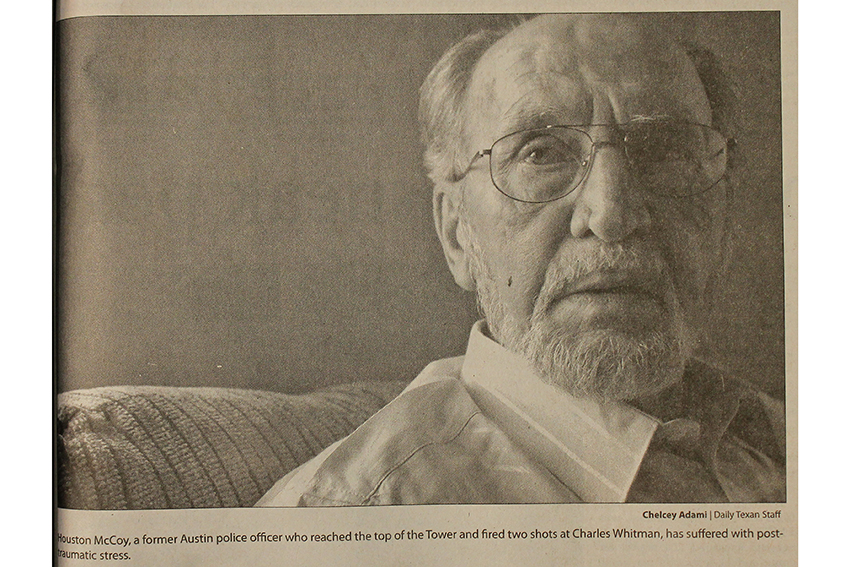 Houston McCoy, one of the Austin police officers who shot the sniper atop the University of Texas Tower 50 years ago, is remembered by his daughter as a humble man.

Monika McCoy, now an APD officer herself, said that around the 40th anniversary when a lot of the police officers, victims and their family members were reunited, her father started talking about the Tower shooting more and she began to understand his role and the impact it had on him.

“It brought us closer together to be able to talk about it and [reuniting] was something they hadn’t really done before,” McCoy said.

McCoy, who serves the West Campus neighborhood, an area her father used to patrol, said she always knew what had happened at the Tower. Every year, reporters would come around and ask questions, but she had never understood the full magnitude.

“You don’t quite grasp things when you’re younger,” McCoy said. “I think in the end, when everyone started coming together, such a great healing process began. It brought my father and I closer together than we already were.”

McCoy said, as the youngest of four children and the only girl, she would always tag along with her father when she wasn’t in school.

“I was daddy’s little girl,” McCoy said. “My father is the jack of all trades. He did masonry work, could build a house up from the ground, and he [knew] the survival skills in the country, like hunting and fishing and growing gardens and he passed all of that on to his children.”

“One of the most important lessons he taught us was to have good moral character, integrity first and foremost, and respect, which probably go hand in hand,” McCoy said. “‘Always do the right thing’ was one of his mottos. ‘Don’t lie, don’t cheat, don’t steal.’ Very basic, but very profound morals and values.”

McCoy said her father was a highly intellectual man, very quiet, easy going and laid back.

“Just in how he handled situations, through observations, is how we learned,” McCoy said. “Whether we were doing wrong, as kids acting up, he never lashed out. There was always a lesson learned, and a lot of it was about patience.”

One of the main things her father taught his children was to show compassion toward other human beings.

McCoy said he taught several people how to fly an airplane at no cost, because he was so passionate about flying.

“Nothing for him was ever monetary,” McCoy said. “He enjoyed being able to teach somebody else that skill, and he could have made extra money by teaching flying lessons, but he taught them free of charge.”

McCoy said in memory books from elementary school, she would always say she wanted to be a police officer, jockey or a skydiver.

“[Being an officer has] always been instilled in me since at least Kindergarten,” McCoy said. “Looking at photos of [my father] in uniform, he looks very stoic, it always stood out to me.”

McCoy said being a police officer is about more than just catching the bad guys and influences the community in a positive manner.

“It’s more about helping people and having a positive influence,” McCoy said. “Letting people know you’re there to help protect them and keep them safe.”