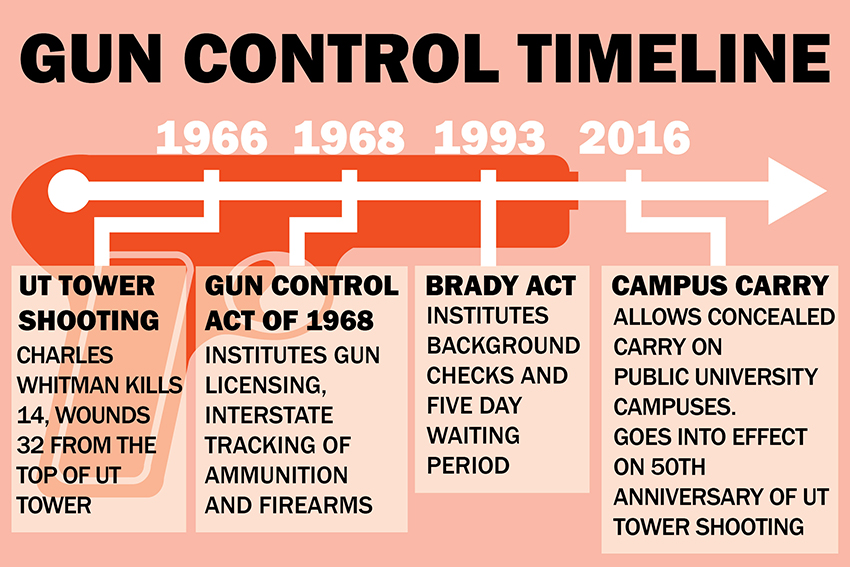 On the morning of Aug. 1, 1966, Charles Whitman purchased one of the seven weapons found with him on the observation deck of the Tower. Whitman was sold a 12-gauge shotgun at Sears Roebuck & Co. at around 9:30 a.m. In some ways, the ‘60s were a time with more lenient gun regulations.

Stores selling guns at the time did not need any sort of license, and they were not required to perform background checks on buyers. There were also no age limits to purchase weapons.

This changed with the Gun Control Act of 1968, which requires gun sellers to have a Federal Firearms License (FFL). Furthermore, sellers must track how much ammunition they sell and to whom.

Currently in Texas, gun owners only need a License to Carry a Handgun (LTC) if they want to take their firearms outside their home or car. Texans do not need a permit to purchase a weapon and don’t need to register it. Those looking to buy a gun from a licensed dealer must pass a background check through the National Instant Criminal Background Check System (NICS) because of the 1993 Brady Act.

Previously, gun owners needed a concealed handgun license (CHL) to carry their weapons. However, since open carry was legalized in January 2016, the LTC replaced the CHL, allowing either open or concealed carry.

Those wanting to purchase a rifle or shotgun in Texas from a licensed dealer must be 18 years or older, while those wanting a handgun must be at least 21 years old. The minimum age to open or conceal carry outside the home is also 21 years old.

There is no limit to how much ammunition an individual can purchase.

The majority of gun owners carried rifles outside their homes for hunting before the legalization of concealed carry in 1996. Because of this, when Whitman told shopkeepers he was going to use the weapons for hunting, he wasn’t questioned further.

Harel Shapira, assistant professor in the Department of Sociology, said the motivation for someone to buy a gun changed after the CHL was implemented.

John Lott, president of the Crime Prevention Research Center and gun rights advocate, said in some ways, there were more regulations back in the 1960s than there are now.

“Back in the mid-60s, you were not allowed to carry a concealed handgun,” Lott said. “Today there are over one million Texans that have permits for concealed carry.”

Beginning Aug. 1 — coincidentally the 50th anniversary of the Tower shooting — those with a LTC will be allowed to conceal carry on campus, which was prohibited during Whitman’s lifetime.

UT President Gregory Fenves suggested prohibiting chambered rounds for those carrying handguns on campus. The Board of Regents voted against this rule, overruling him.

UT alumnus Bobby Petmecky said he is glad the policy was rejected and that not having a chambered round could be a potential risk to a licensed holder.

“I think about it as time being wasted in a very time-sensitive situation,” Petmecky said. “If someone comes into [a] classroom and starts shooting, taking the time to work a round in the chamber could cost someone their life. We shouldn’t put limitations like that on people who could save lives.”