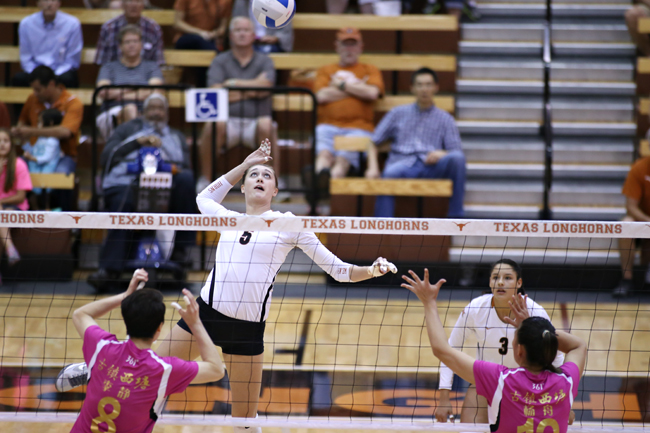 It’s been an eventful few months for sports in Austin. Stories like new baseball coach David Pierce’s hiring and an influx of top football recruits stole headlines throughout the summer. But there is still more to catch up on.

Here are some of the top stories you might have missed this summer.

“Since I got to UT, I knew that I loved this sport enough to continue playing after college,” McCage said via email. “It’s been a dream of mine for a while now.”

McCage’s decision comes after a stellar senior season in which she earned first team All-Big 12 and third team All-American honors. She finished her four-year career as Texas’ all-time leader in block assists.

Now she hopes her skills will translate over at the professional level. She said she’s excited to join her team and compete for a championship overseas.”

“Ever since I signed, so many people from the club have reached out and welcomed me,“ McCage said. “I just know that I’ll be in good hands over there.”

Adjusting to a new country hasn’t phased McCage, who said she has always appreciated German culture. She emphasized the experience will test her maturity and help her continue to grow up.

“I am just ready for a new adventure,” McCage said. “I know that life will be very different than what it’s like here at UT, but I am so ready!”

After landing five-star center Jarrett Allen in June, Smart shipped out to Valdivia, Chile to coach Team USA’s under-18 team in the FIBA Americas U-18 Championship in July. His team included newly-signed Longhorns in Allen and four-star forward James Banks.

Team USA took the gold after beating Canada 99-84 in the championship to finish undefeated.

Smart said the experience helped Banks and Allen grow chemistry together. He also said playing in competitive games — players are usually bound to workouts at this point in the offseason — helped them develop their skills.

“It was a good learning experience for all of us,” Smart said. “From the standpoint of practicing with a very high-level group of guys, many of whom are future NBA players, and playing together with those guys … it was really good for them.”

The X Games ended their three-year stint in Austin this past June. The competition and its venue, the Circuit of the Americas, decided to end their four-year contract early for scheduling reasons.

X Games Vice President Tim Reed said he hoped the event would “go out with a bang” in its final year. But weather conditions failed to cooperate, leaving attendees with an incomplete experience. Performances by rappers Logic and G-Eazy were cancelled, while several competitions were postponed or cancelled.

“Weather’s been working against us,” attendee Chris Lupton said during the Games. “[Attendees from out of town] are missing out on two days’ worth of events.”

The X Games still left their mark on the city. They hosted over 100,000 people in all three of their years in Austin. Competitors and executives also emphasized that the competition meshed with the city’s culture, creating an ideal environment for an action sports competition.

“Action sports are made up of lifestyle elements like film, photography, art, music — those are all really prevalent in Austin,” Reed said during the games. “It makes sense that when you drop the sports out of [the X Games], all the lifestyle elements are already here.”