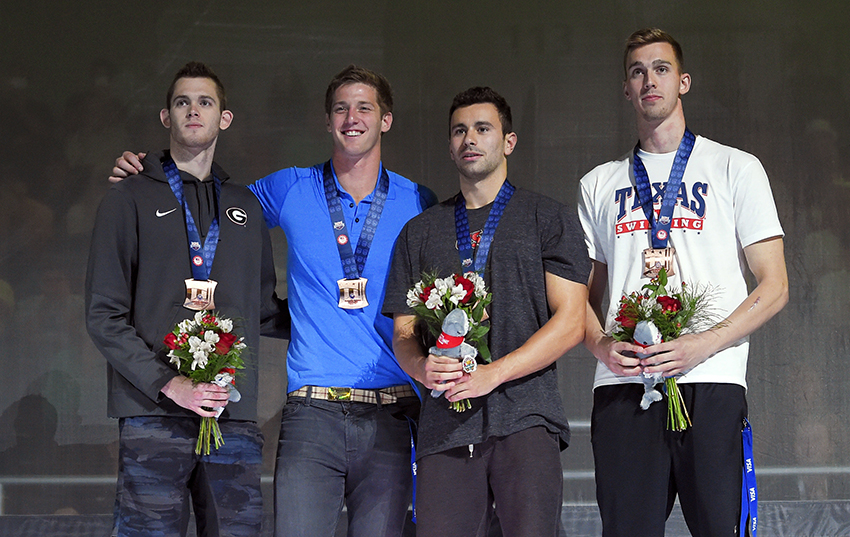 One of the four United States swimmers who claimed to have been robbed late on Saturday was seen fighting with a gas station security guard on footage from the same night, according to ABC News.

“One of the swimmers was seen on CCTV footage breaking down the door to the bathroom at the gas station and fighting with a security guard,” a Brazilian police source said to ABC News.

Junior swimmer Jack Conger and former Longhorn Jimmy Feigen were with Ryan Lochte and Gunnar Bentz on Saturday night, when Lochte claimed to have been robbed by armed individuals posing as police outside the Olympic Village in Rio de Janeiro.

However, there’s been growing skepticism about the swimmers’ testimony in Brazil. Police have been unable to find witnesses or any evidence from the alleged robbery. Fernando Veloso, the civil police chief, and Alexandre Braga, Rio police deputy said Thursday at a press conference that a security guard at the gas station did wield a weapon, but there was no robbery in the way the swimmers claimed, the New York Times reported.

Feigen told the San Antonio Express-News that he stands by their testimony regarding the robbery.

"We were robbed at gunpoint," Feigen said. "It sounds like people assume we're guilty."

Brazilian judge Keyla Blanc de Cnop issued an order Wednesday to seize the swimmers’ passports because of discrepancies in their testimonies. Bentz and Conger were pulled off their flight Wednesday night, while Jimmy Feigen never made it to the airport, according to the Houston Chronicle. Lochte returned to the United States before the warrant was issued, according to his lawyer.

Conger and Bentz’s lawyer told the Houston Chronicle the swimmers won’t be permitted to leave Brazil until they give their full testimony.