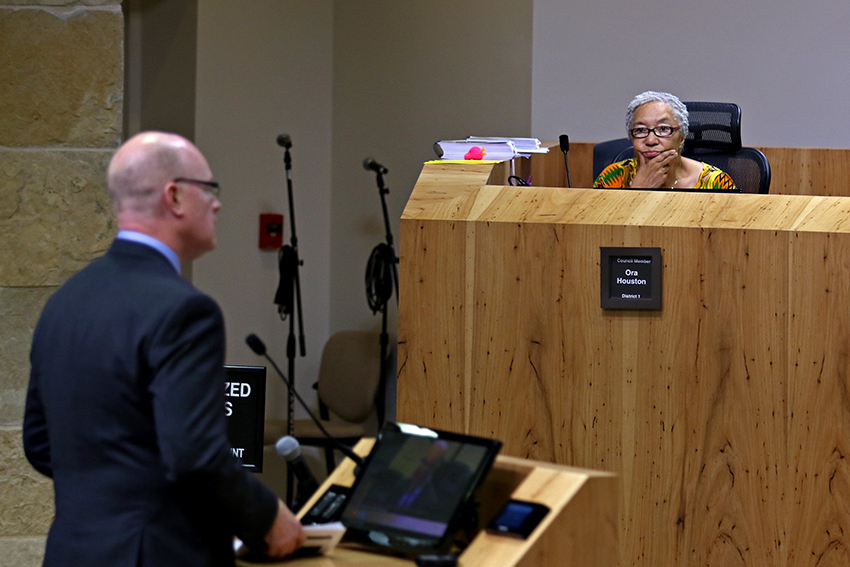 “We have two big problems in this city: mobility and affordability. They are tied to each other,” Mayor Steve Adler said. “Our community wants us to do something.”

With seven in favor, one opposed and three abstaining, council members were divided Thursday on the bond, which aims to address transportation and affordability, two issues the current council has attempted to pin down for years. The November bond would reallocate funds from its current bond reserves and new tax increases to pay for improvements to city sidewalks and key Austin transportation corridors, including Guadalupe Street and East
Riverside Drive.

Most of the bond package’s funding will go toward mobility infrastructure improvements along up to nine key transit corridors, with a total of $482 million addressing congestion and safety in those areas.

Council member Pio Renteria, who voted in favor of the final reading, said the bond package would improve safety on several of the most congested streets in Austin.

If approved by voters in November, the bond — the largest Austin has ever seen — would use up half of the City’s available bond funds, while a new tax rate of 2.25 cents per $100 of property value for homeowners would fund $470 million of the package’s spending projects.

Although the council was unified on the bond package before Thursday’s vote, several council members raised concerns over the short amount of discussion on such a large bond and its possible ramifications on taxpayers.

Council member Ora Houston, the only member to vote no on the final reading of the bond package, said she agreed with the bond package’s intent but was concerned with whether the bond would put a heavy tax burden on poorer Austinites.

“Because of the process, because of the lack of transparency of the cohorts that put together these plans, I will be voting against this bond,” Houston said at the meeting. “We don’t have any idea what the tax increase will be on the elderly, the low-income population.”

Council member Don Zimmerman, who abstained alongside council members Ellen Troxclair and Delia Garza, agreed that the council and legal staff could have spent more time discussing just how much the bond package would cost city taxpayers.

“Our legal staff — paid for with tax money — has been lobbying and lobbying and lobbying … presenting one side of the information and I believe deliberately misleading me on what we’re allowed to do under the law,” Zimmerman said. “It’s very, very clear that we could have some form of statement to talk about the cost.”

According to the bond package resolution, the city manager is supposed to ensure the bond’s goals are completed in eight years from voter approval, or by 2024.