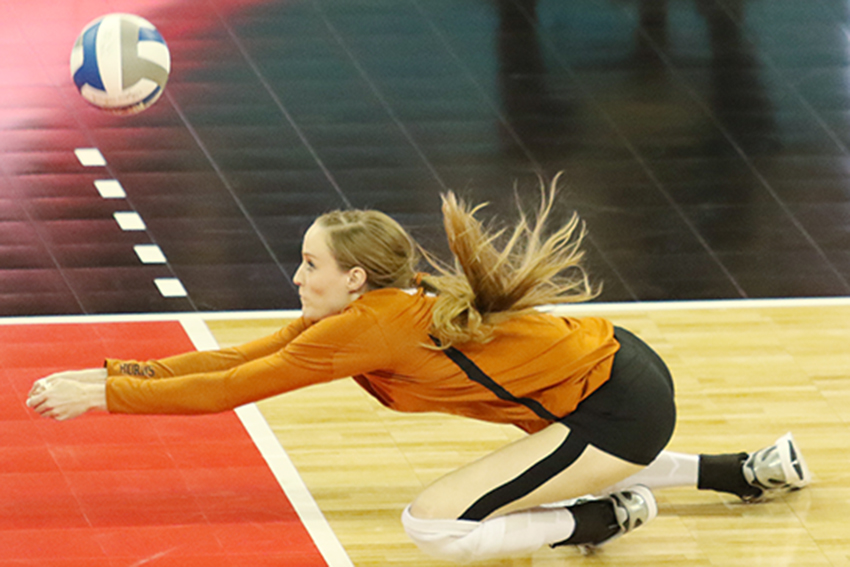 The Longhorns’ 2015 season ended with streamers falling from the rafters.

But instead of celebrating in the excitement of winning another National Championship, Texas was forced to watch.

Nebraska led from wire-to-wire in a 3-0 match on the sports’ biggest stage, clinching its fourth championship since 1995 and sending the Longhorns home empty-handed.

“I’m just more proud of this team,” head coach Jerritt Elliott said after the match on Dec. 19. “Seniors have created a culture that has never been created before in terms of the chemistry and the trust and unity.”

Texas will remain in the shadows of Nebraska for the beginning of the 2016 season as the Cornhuskers rank No. 1 with 60 first-place votes. The Longhorns open the season in the No. 2 spot with three first-place votes.

Although the team has not won a national title since 2012, it still has championship experience in its head coach. Elliot has quickly become one of college volleyball’s most dominant coaches since starting his tenure on the 40 Acres in 2001.

“We’ve set a standard at this program,” Elliott said. “We expect to be in a position to compete for a championship every year.”

And the Longhorns have lived up to that standard so far.

Texas has captured eight of the last nine Big 12 titles — including the last five. The program has also appeared in seven Final Fours and three title matches since 2007.

But the Longhorns still have only brought home championship hardware once. The team will look to end that four-year drought in 2016 — Elliott already senses big-time potential.

“This group is special,” Elliott said after the team’s Orange-White scrimmage on Saturday. “I love the chemistry of this team. I think it’s continued from what last year’s group has had.”

But in order to win its sixth straight conference title, Texas will need to get some valuable production from its freshman class.

“The freshman are all eager to learn and bring positive attitudes to the team,” senior setter Nicole Dalton said. “They are always asking questions and wanting to learn more so we can win the championship this year.”

The Longhorns biggest addition is Agbaji, who was named one of Volleyball Magazine’s top five recruits. They also added some needed depth in middle blocker Blair Westerlund, outside hitter Micaya White and liberos Claire Hann and Autumn Rounsaville.

“Claire and Autumn have been really good at practice and have definitely been pushing other freshman at practices,” Dalton said. “They let everyone know that they should all be pushing us for a spot on the court.”

Texas can start its season strong in Eugene, Oregon, this weekend. The team will take on Oregon on Friday and face a rematch of the title game against Nebraska on Saturday in the VERT Challenge tournament.