Women’s basketball: Key games to look out for 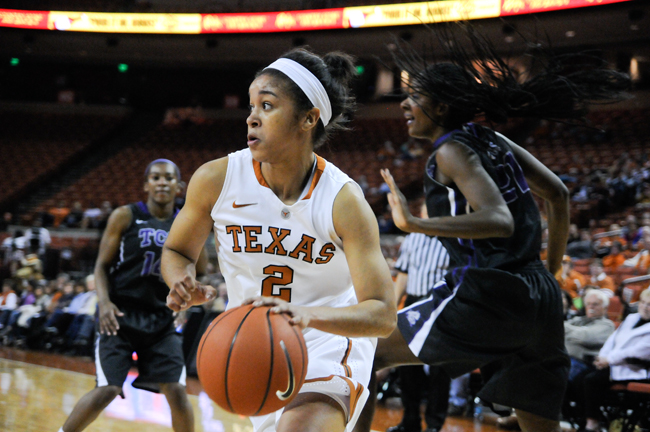 Coming off a 31-win season and an Elite Eight appearance, the Longhorns are optimistic about their upcoming 2016-17 campaign.

But a loaded non-conference schedule stands in the way between Texas and another big season. Here are a few key matchups to look out for.

Nov. 14 vs. Stanford
The Longhorns make their season debut on Nov. 14 against the Cardinal in Palo Alto, California. When Stanford came to Austin last December, Texas had an impressive scoring performance and came away with a 77-69 win. The Cardinal went on to win 15 games and finish third in the Pac 12. They picked up the nation’s No. 9 recruiting class, according to ESPN, and return leading scorer Erica McCall. Texas has outlasted Stanford the past two seasons and will look to make it three in a row in 2016.

Dec. 4 vs. UConn
The Longhorns and Huskies will meet in the 2016 Jimmy V Women’s Classic on Dec. 4. Texas will travel to Connecticut in a much-anticipated rematch between the two storied programs. UConn ended the Longhorns’ 2015-16 season with a dominant 86-65 victory in the Elite Eight before going on to win its fourth-straight national title. Despite the loss, sophomore guard Lashann Higgs and junior guards Ariel Atkins and Brooke McCarty impressed with their scoring. With key players Breanna Stewart and Morgan Tuck departed for the WNBA, UConn will feature several freshmen in McDonald’s All-American Crystal Dangerfield, Molly Bent and Kyla Irwin.

Dec. 11 vs. Tennessee
Last season, the Longhorns marched into Knoxville for a showdown between top 10 teams and emerged victorious, 64-53. The Lady Vols returned to form later in the year, finishing 22-14, and the team made a run in the NCAA Tournament. They won three games before falling to Syracuse in the Elite Eight. Tennessee will look to build on their postseason momentum with an early season win in Austin, while the Longhorns hope to top the Lady Vols for the third-straight season.