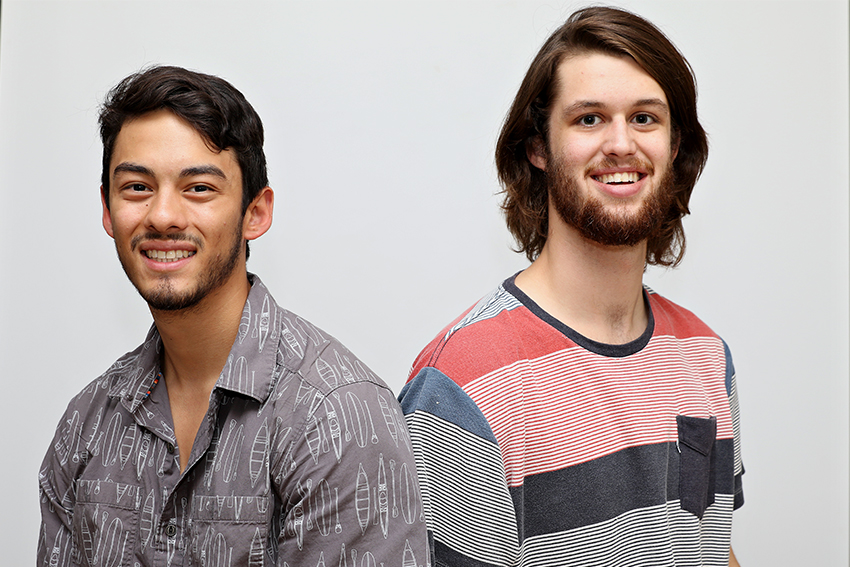 A year ago, Chris Prinz walked into his intro to marketing class, beginning his second year at UT. But on the first day of school a year later, he was far from campus, feverishly working behind computers and rushing to finish his debut app.

Prinz, a management informations systems sophomore, along with his friend Carey Janecka, a computer science sophomore, withdrew from the University last spring to create Tether, an iPhone application that pairs students with organizations on their college campuses that match their interests.

Janecka, the CEO, manages the technical operations, while Prinz — who earned his lowest grade at UT in his intro to marketing class — handles the business side of the project. The app is scheduled to be released at UT, Texas Tech and Texas A&M next week.

According to Forbes.com, nine out of 10 startups fail. Because the odds are stacked against them, Prinz said he and Janecka knew they had to go all in — even if it meant dropping out of school.

“It’s less scary and more exciting,” Prinz said. “It’s the high-pace, energetic environment we’re looking for. The people who choose this lifestyle don’t call this fear. Initially, it was very daunting, because I realized I’m very much diverging from this normal path of school [and] family.”

Tether originated from Prinz’s own college experience. Both he and Janecka struggled to find their niche on campus and were discouraged by other sites like HornsLink, which lists UT’s organizations, but doesn’t play an active role in matching them with students. Janecka said he learned other campuses, such as Texas Tech and Texas A&M, suffer the same challenges.

“With 50,000 undergraduates, you’d think you’d be able to find the dozen that are your best friends, but it’s hard,” Prinz said. “Neither of us really thought we found our place.”

The duo also noticed the inherent segregation and lack of diversity within many campus organizations. Janecka said people tend to navigate toward others from the same socioeconomic background, and because recruitment for many clubs is done through word-of-mouth, organizations often become homogeneous.

“We wanted to find a way to help students find an organization they really want to be a part of and bring authenticity to that recruitment progress,” Janecka said. “[We want] to pair students based on interest, not on friends or reputation.”

After the launch next week, Janecka and Prinz want to continue expanding to other universities nationwide. They also intend to link Tether to nonprofits or volunteer groups outside of the University so that, if a student is interested in animals and volunteering, for example, they could be paired with an organization like Austin
Pets Alive.

By the end of the year, the co-founders also hope to incorporate revenue-generating features. So far, the duo has bootstrapped the project with donations from family and friends.

“If you just want to make money, no one would want to help you,” Prinz said. “Because we want to improve the student experience and we realize how big of an issue it really is, we’ve gotten so much support. That’s invaluable.”

Janecka said they understand it’s a long road ahead, but they are excited to make an app that will impact student’s lives.

“It’s super exhilarating to see, because you’re building everything with your hands,” Janecka said. “We had no company before, and now we’re about to launch a product.”