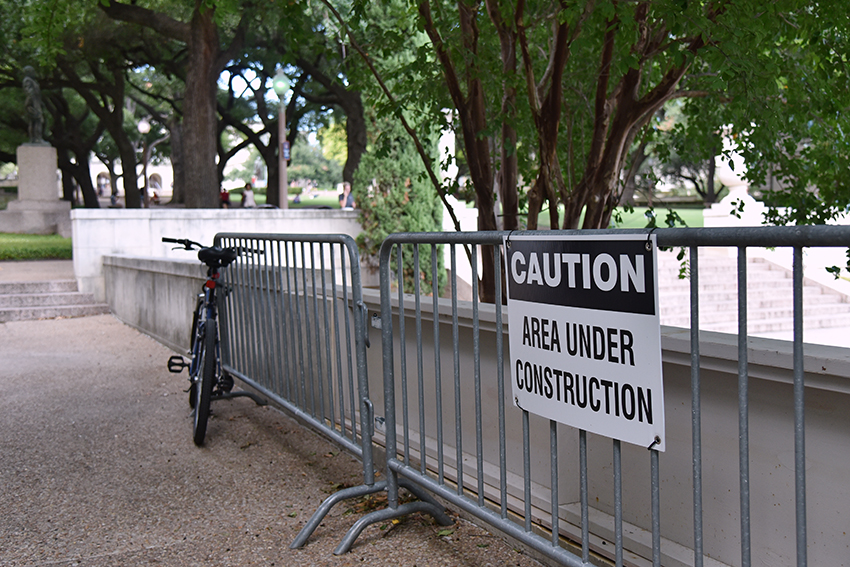 Panels honoring fallen Confederate soldiers who served during the Civil War have been removed from campus without the University notifying the UT community.

On July 7, the panels were marked with the words “Black Lives Matter” following the shootings of Philando Castile and Alton Sterling.

The panel was removed later in July without a public statement, but the removal was open and visible to the public, according to J.B. Bird, director of media outreach for the president’s office.

“The inscription is in storage,” Bird said. “Its ultimate destination has not been decided yet. The Jefferson Davis statue will be put on exhibit this spring at the Briscoe Center. Display options for the Wilson statue have not yet been determined.”

UT President Gregory Fenves established the Task Force on Historical Representation of Statuary last summer and asked it to “examine the historical context and social, artistic, and political intent of statuary” on campus after Student Government passed a resolution to remove the statue of Jefferson Davis, the Confederate president. The statue of former president Woodrow Wilson was also removed from the Main Mall to maintain symmetry.

He consulted with the group again for guidance on the panels.

“After more thought from the task force over the summer and meeting with students and student groups over the fall semester, I decided it was best to remove the inscription,” Fenves said.

Fenves originally considered putting a plaque near the panels and other Confederate statues on campus to provide historical context.

Sergio Cavazos, government senior and president of the Senate of College Councils, wants to create a campus that is more inclusive for current and prospective Longhorns.

“In terms of creating a campus that’s inclusive overall, it’s something that needed to be done,” Cavazos said. “Obviously we acknowledge historical events, but also we realize that some events carry a significance that’s more of a negative for campus.”

Fenves says he has no plans at this time to remove the statues of Robert E. Lee, Albert Sidney Johnston or John H. Reagan, who also have Confederate ties.

Jonathan Davis, president of the UT Black Graduate Student Association, considers the removal of the transcription a step in the right direction to rectify the blemishes of history in the United States.

“In order for the University of Texas to live up to its mission statement, it must make tangible and noticeable strides towards becoming inclusive and welcoming to all students,” Davis said over Facebook. “These subtle reminders of the Confederacy immortalizes and even glorifies men that died to preserve a nation that enslaved Black men, women and children, from whose descendants walk this very campus.”