Kelly earns win No. 200 as Texas tops College of Charleston 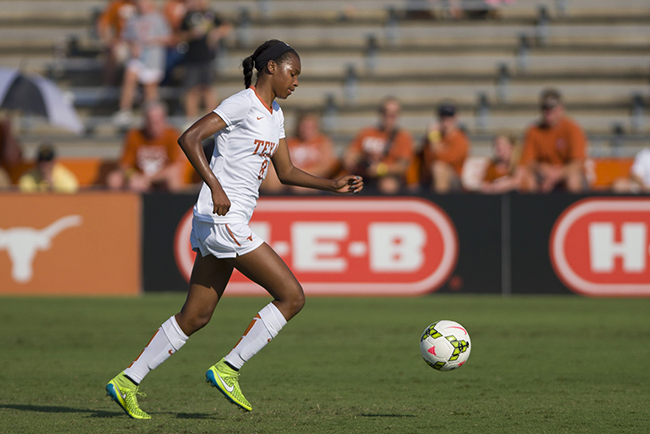 Alexa Adams felt defenders surrounding her as she took the ball across midfield.

But the sophomore forward still dribbled right through the teeth of the College of Charleston’s back line with conviction, firing a shot while holding off two oncoming defenders in the process.

The ball soared into the back of the net in the 58th minute to put the exclamation point on Texas’ 3-1 win over the Cougars.

“I think we just came out with a better mentality this week,” Adams said. “We worked all week to get back to where we know we should be because last week we didn’t get the result that we wanted.”

The win marked the first for the Longhorns this season and No. 200 of head coach Angela Kelly’s career. And other than the surprise of an ice-cold Gatorade shower after the game, Kelly said the win is no different than all the others.

“Two hundred and one is just as important as 200 in my book,” Kelly said. “There’s a ton of players that had blood, sweat and tears for that accolade. I’m just really appreciative of them.”

“She puts in so much work for this team,” Hart said. “She’s just a huge competitor, and she wants nothing but the best for us. She deserves it more than anyone else.”

The Longhorns made a point to set the tempo early on offense. A free kick from freshman defender Emma Jett sailed into the box and found an awaiting Hart, who headed the ball past the College of Charleston goalkeeper and into the net. Hart, however, was called offside.

But the early attempt turned into just a warmup for the senior forward and the rest of Texas’ offense.

The Longhorns broke the scoring open in the 22nd minute when junior forward Olivia Brook capitalized on a quick pass into the box, putting the Longhorns up, 1-0.

Four minutes later, Hart found herself threatening again with a chance to score. This time she would not be denied. Junior defender Monique Iannella launched a cross from the right wing, and after a few deflections, the ball fell into Hart’s possession. She capitalized with the team’s second goal on the night.

“[Hart] was fearless,” Kelly said. “She’s wonderful because when you tell her something, she immediately wants to apply it. [I’m] really proud of the way she was an aggressor.”

Texas moved to 1-1 on the season with the win. The Longhorns will try to build off the victory at home against Detroit on Sunday at 2 p.m.

“With this win, we know what we need to do for the rest of the season because we can play big teams, and we can win,” Adams said. “We just have to come out with a strong mentality and show up to play every week.”