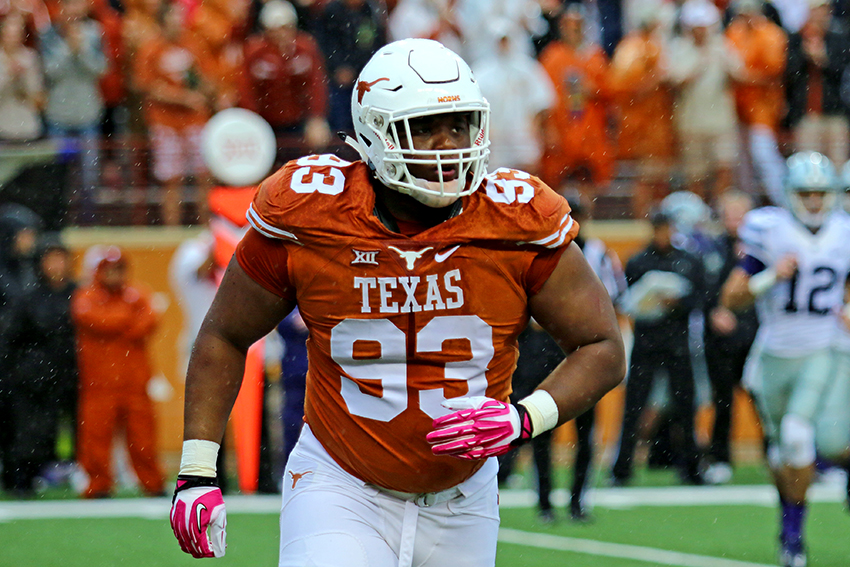 Head coach Charlie Strong is set for a crucial season in 2016.

After going 11-14 over the past two years, the pressure is on for Strong to start showing results and turn the program around.

The quarterback battle between freshman Shane Buechele and senior Tyrone Swoopes stole most headlines throughout the summer, but Texas must shore up another critical uncertainty: the team’s run defense.

The Longhorns struggled to plug holes up front last season. They gave up 219.2 rushing yards per game — the third most in the Big 12.

Defensive coordinator Vance Bedford said he was embarrassed by the defense’s inability to stop the run in 2015. He said the coaching staff’s top priority this offseason has been to strengthen the struggling unit.

“We were terrible last year,” Bedford said at Texas’ media day on Aug. 6. “As coaches, we are going to work hard. We’re going to put our players in the position to make plays.”

Tackling issues highlighted Texas’ defensive woes in 2015. The front seven struggled to finish plays all season while taking poor angles on running backs. And the unit’s inability to wrap up the quarterback when breaking through into the backfield gave quarterbacks more time to find open receivers.

Sophomore linebacker Malik Jefferson said tackling has been an emphasis this offseason. He expects the unit to show improved fundamentals this year.

“Guys are running to the ball,” Jefferson said. “When you have all 11 guys running to the ball, somebody may miss a tackle but somebody else is going to be there. And we’ve been focusing on tackling a lot. We’ve been focusing on tackling a lot, especially every day we do some type of circuit drills to make sure we got our techniques down. It’s been helping us.”

Senior safety Dylan Haines echoed Jefferson’s confidence. He said the defense — which played several freshmen in 2015 —  is more experienced this season. And he believes the extra experience will help.

“This year we just come in with more confidence and preparation,” Haines said. “We have a lot of guys who got a lot of experience last year … those guys are not freshmen anymore.”

The Longhorns hope their extra preparation pays off against Notre Dame on Sept. 4. The Fighting Irish were one of the most efficient rushing teams in 2015, ranking No. 8 in yards per carry with 5.6.

Senior defensive tackle Paul Boyette Jr. emphasized he is not worried about the team’s issues from last season. He said the team is ready to make a statement.

“[We understand] what needs to be done to get the school back to greatness,” Boyette said. “Texas football is defense … we want to be remembered for the 2016 season going out there and being one of the most physical defenses in the nation.”