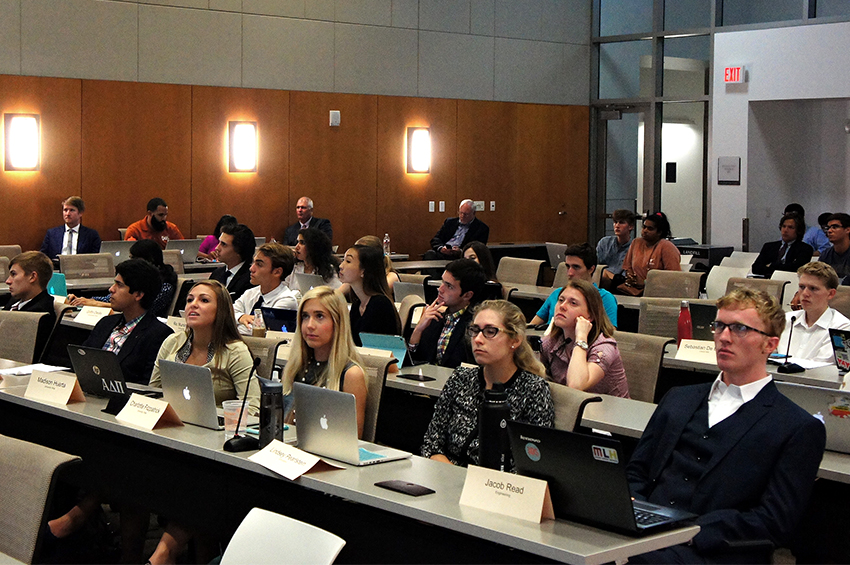 Student Government held its first general assembly meeting of the year Tuesday, approving the budget as well as laying out plans for the coming year.

The first meeting of the 110th session included descriptions of the executive committee’s seven platform points and an amendment to the Student Government Code of Rules and Procedures that aims to increase the organization’s outreach.

“All seven members of the executive board each have taken a policy area that we are each going to work with for the next year,” said chief of staff Isaiah Carter, a government junior. “We think that the best way to achieve all of them is to delegate them.”

Kevin Helgren and Binna Kim previously ran on five platform points but have increased that number to seven in order to address more concerns, Carter said.

“As chief of staff, I’m going to be working on campus safety the entire year,” Carter said. “Safety was something that happened
because we got sworn in right after the tragedy on campus, so obviously safety became a priority.”

The budget for the various committees and organizations within SG, as well as for student organization
appropriations was approved unanimously by the body.

“Student Government has a budget graciously given to us by the University of almost $100,000,” said internal financial director Jonathan Harper, a finance and Plan II senior. “We went item by item and cut out about 30 to 40 percent of the items that were requested in terms of the monetary amount. We really wanted to find events and make sure they happened, but areas that could be cut out, like T-shirts, we cut out.”

Student Government agencies and student organizations are encouraged to raise their own funds on top of those they are allocated by the budget, Harper said.

“Certain organizations excel at raising funds and are more well known than others, while some need the Student Government funding to accomplish their events,” Harper said. “So we allocate on a needs base as well.”

Assembly Bill 5 was approved unanimously increasing the number of executive staff positions from three to 16.

Communications director Colton Becker said the increase in permanent positions to his executive staff will allow SG to be more transparent and reach out to a broader number of students.

“I wanted to make Student Government more efficient and effective and allow us to communicate with the student body in a way that is reflective of us being the official voice of the student body,” said Becker, a nutrition junior. “I restructured the positions that were there in order to make communications a machine and to also create a lasting legacy so when the next communications director comes in, instead of starting from scratch, they’re already on a path to greater and
bigger things.”