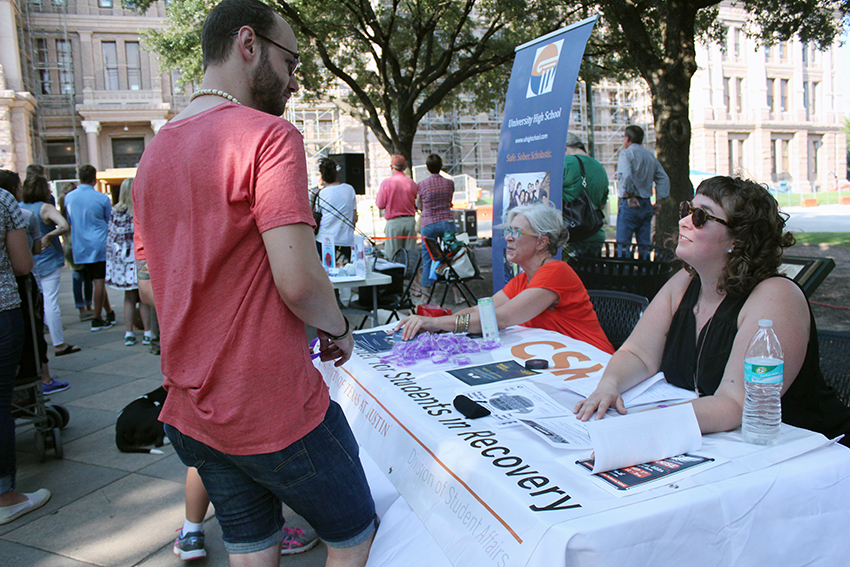 On Wednesday evening, more than 100 Austin residents, including UT-Austin students and professors, gathered on the south steps of the Texas State Capitol to recognize International Overdose Awareness Day.

The event featured speakers who educated attendees on opioid overdose prevention and encouraged them to remember loved ones who lost their lives.

“This particular epidemic is the leading cause of accidental death in the United States,” event coordinator Mark Kinzly said. “We want to recognize that and bring some education in remembrance of those we have lost from unintentional overdoses.”

Lori Holleran Steiker, a professor in the School of Social Work, spoke about her work with the UT Wellness Network’s Opiate Misuse and Overdose Prevention Committee to increase awareness across campus about opiate overdoses. She also explained her work with College of Pharmacy instructor Lucas Hill to make a naloxone-based product, Narcan, available in on-campus dormitories.

Naloxone is a medication that blocks or reverses the effects of an opioid related overdose.

“We know that opioids are rampant in Austin, and, in fact, the situation is liable to get worse,” Holleran Steiker said. “Everyone thinks it’s heroin that we are talking about, but sometimes it’s pain meds that one of our athletes is on and [then] goes out to Sixth Street. You can overdose from just pain meds and alcohol.”

The University is in the final stages of approving policy that would allow UTPD officers to carry and use naloxone in the event of being a first responder to an opioid overdose emergency.

Holleran Steiker also shared details of how Hill trained all resident assistants over the summer on how to identify the symptoms of a person having an opioid
related overdose.

“RA’s currently know how to use naloxone and where it will be,” Hill said. “I’ve heard it quoted that on campus, UTPD arrives on scene after a call in five minutes on
average, so that means that they could be a resource to save lives.”

Holleran Steiker, who struggled with alcohol addiction early in her life, said prevention doesn’t always work, especially for those predisposed to substance addiction.

“Anybody that’s predisposed to addiction with their brain chemistry, it’s hard to prevent it,” Holleran Steiker said. “Once you add the alcohol and drugs, which most kids do because experimentation is normative, then they’re just off to the races and it’s hard to get your arms around.”

“I am so proud of The University of Texas,” Holleran Steiker said. “The biggest barrier for universities is they’re aware of how much stigma is attached to this. They don’t want the world to think that they’re worried about somebody overdosing, but it’s denial. The truth is, for the number of students we have at UT, there are going to be kids using opioids.”

Students for Sensible Drug Policy also played a part in planning the event.

The organization also authored legislation for approval by Student Government that allowed for naloxone to be kept in dormitories and to train UTPD officers in the use of naloxone.

“The opioid epidemic is becoming more and more serious,” said Hamborsky, a Plan II and biology senior. “It’s happening more to young people, so personally it affects me and my community.”