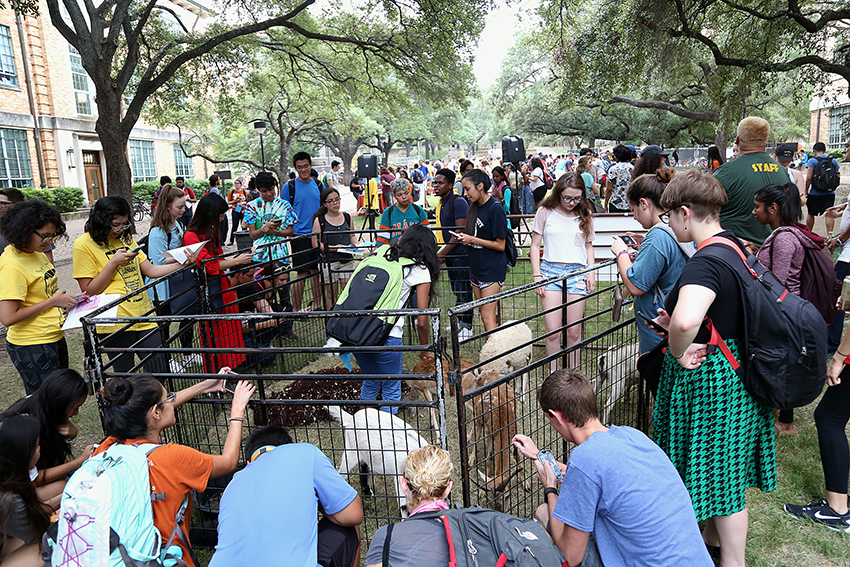 Students for Equity and Diversity hosted its Justice Jubilee festival Thursday to raise awareness for social justice issues on campus.

Justice Jubilee is a welcome program for new UT students who have an interest in social justice. Students gathered on the East Mall for the carnival-themed festival and enjoyed SED’s petting zoo, free music, popcorn, popsicles and prizes.

“We saw a poster for Justice Jubilee in Jester, so we decided to come by,” business freshman Claire Sullivan said. “I had never heard of SED, but I think it’s good they put on fun events like this that aren’t right in your face and pull you in.”

“We want Justice Jubilee to attract freshmen and sophomores who are still figuring out their place on campus,” Mrabet said. “We want to create an interactive environment where marginalized students on campus can feel comfortable talking about what they’re going through.”

The organization would like to address as many social justice issues as possible, so narrowing their focus down will be a challenge, Mrabet said.

“Race, gender, sexuality and identity are the main issues we would like to work with, but we are trying to cover as many as we can this year,” Mrabet said. “The biggest challenge right now is coming up with content and figuring out what social justice issues we want to talk about.”

“I felt like at Party [on] the Plaza, everyone was screaming in my face for me to stop at their table,” Hopper said. “If I’m interested, I’ll come to your booth, and SED definitely got me interested.”

Racquelle Requenez, biology and anthropology sophomore, said she stopped by to pet the baby pig.

According Brandelyn Franks Flunder, director of the Multicultural Engagement Center, SED was incorporated into the MEC in 1998 and promotes social justice awareness on campus through community development, interactive workshops, peer-facilitated dialogue and outreach efforts.

“Next week, we have a workshop on identity,” Shahab said. “We want the events to be very interactive and for students to have fun as we discuss inclusiveness
and diversity.”

This story has been updated since its initial publication. It previously stated that Students for Equity and Diversity started in 2013. SED was incorporated into the Multicultural Engagement Center in 2013, and was originally a Dean of Students program.