Gone To Texas video winner ready for next adventure 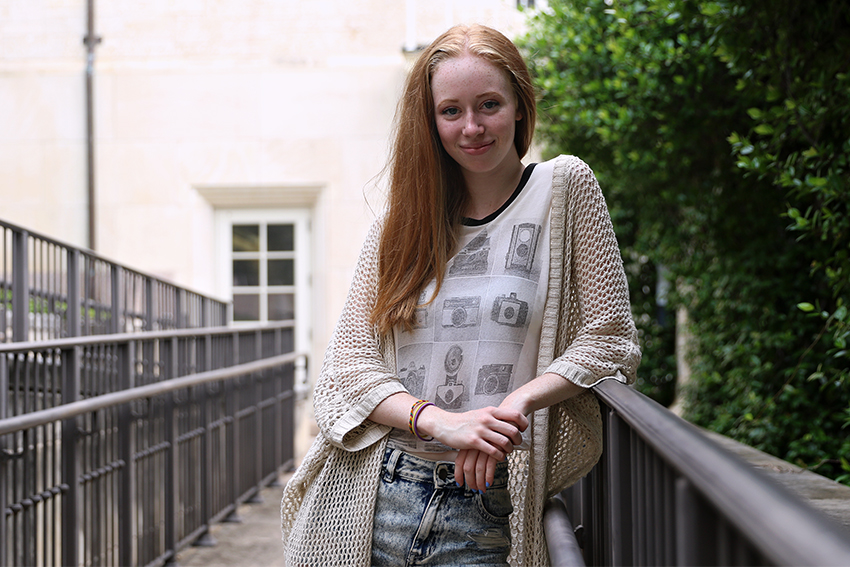 At age 12, Alexandra Goodwin started acting classes, but she was told being an actress was unrealistic. Despite her protests, when her mom signed her up for a filmmaking class, Goodwin fell in love with it.

Goodwin, a radio-television-film freshman, won the 2016 Gone to Texas student video contest Aug. 23. The theme for the contest was “Discover What’s Next.”

“I didn’t really know what to expect going into Gone To Texas, but seeing all the performers and speakers was so cool,” Goodwin said. “You could see everyone’s pride for UT, and I finally got the extreme pride for [my] school.”

Goodwin grew up in Cypress, Texas, and her parents loved to camp and travel. A trip her family took to New Mexico last summer was her inspiration for the video.

“New Mexico really hit me,” Goodwin said. “I remember feeling so small compared to everything we saw, like the giant forests and caverns.”

When Goodwin read the prompt, she knew that an adventure would be the way she would “discover what’s next.” The video depicts Goodwin wandering through the wilderness in New Mexico as she describes the criteria for writing an adventure story.

“She was really able to capture that idea of moving forward and moving forward quickly,” Brock said. “For her, going to UT is a big, big step. I think her film, for me, really showed her willingness to step outside and see what adventure is all about.”

Goodwin has a few filmmaking goals since moving to Austin, and they are just as adventurous as her Gone To Texas film suggests. The first one is getting to know Austin.

“I want to explore the whole city,” Goodwin said. “I want to take a weekend with my friends and go to all the coolest places in Austin and make a short film. To me that’s my dream weekend.”

In her junior year of high school, Goodwin started exploring filmmaking seriously, getting her start with surrealist photography, which bled over to her dramatic films. Her first film, “Dreamer,” is about a young painter who lives in her works to escape her otherwise lonely social life. Goodwin said the dramatic element is a common theme in all of her films.

Since then, she’s explored all different varieties of film and molded her style to what it is now. Brock said she has also learned to take advice without losing her voice.

“[She is] willing to maintain her own vision,” Brock said. “She would take the feedback and really think through it and try new things and then ultimately combine it with her own vision.”

Nathan Smith, an international relations and global studies freshman, has acted in a handful of Goodwin’s films and was shocked when he first saw her film at Gone To Texas.

“It honestly made me so proud,” Smith said. “She would never have received that recognition in a northwestern suburb of Houston.”

Smith said every creative person has their ups and downs, but he sees improvements in Goodwin’s filmmaking.

“It was one of her better films, and the work on it was extremely well edited,” Smith said. “I can see the progression in her work that she may not see sometimes. They just keep getting better and better.”