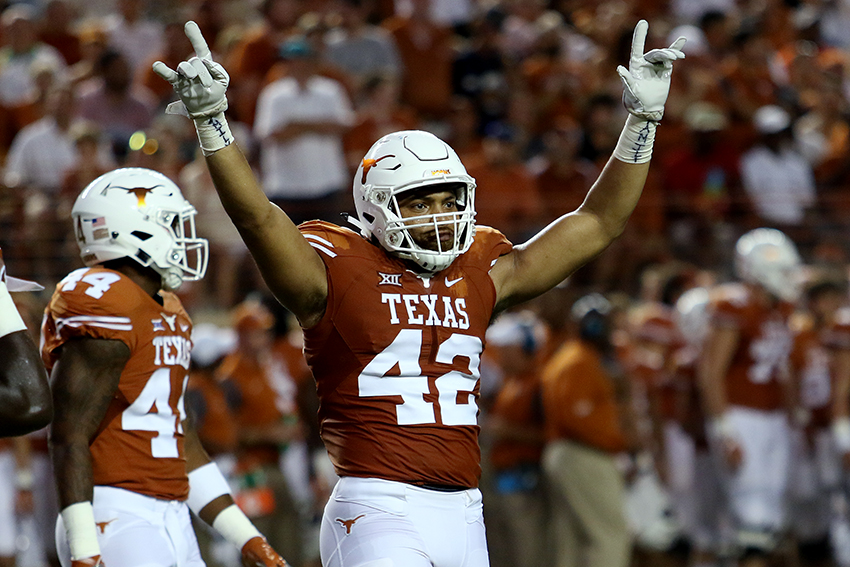 Texas’ victory over then-No. 10 Notre Dame on Sunday signaled the team is ready to be back in the national conversation.

Head coach Charlie Strong said the Longhorns needed the victory to “get this program back in the spotlight” and noted the importance it had on the team’s confidence moving forward.

More validation came for Strong on Tuesday as Texas bolted to No. 11 in the Associated Press Top 25 Poll and No. 20 in the USA Today Coaches Poll.

The AP Poll marks the first time the Longhorns have been ranked under Strong, who entered 2016 at 11–14 in two years leading the burnt orange. For a program that floundered following former head coach Mack Brown’s departure in 2013, Texas’ victory was a large step in the right direction.

“We’ve been down for so long, and people have been talking about us,” Strong said. “It was a night for us to just make it right. At least for one game, for one game. I’m just so proud of our football team.”

The No. 11 ranking is the Longhorns’ highest in the AP Poll since October 2012. Texas ended that season with a 9–4 record and a 31-27 victory over Oregon State in the Alamo Bowl, the last of the program’s bowl wins.

The Longhorns now sit at the top of the Big 12 in terms of the AP ranking, surpassing No. 14 Oklahoma, No. 15 TCU, No. 22 Oklahoma State and No. 23 Baylor. But Texas players are adamant they must remain hungry and humble.

“We’ll be back up here, probably tomorrow, watching film on UTEP and getting ready for the next game,” junior linebacker Naashon Hughes said on Sunday. “We beat the No. 10 team, but we have another opponent coming, so we’ve got to get ready for them too.”

However, the victory didn’t translate into sustained excellence through the season’s end. The Longhorns split their final six games en route to a 5–7 season.

Strong knows the win over the Fighting Irish — who fell to No. 18 — was meaningful. But he emphasized the victory doesn’t guarantee success throughout the year.

“One game does not make a season,” Strong said. “We have many more to go, but this is a great start for us.”