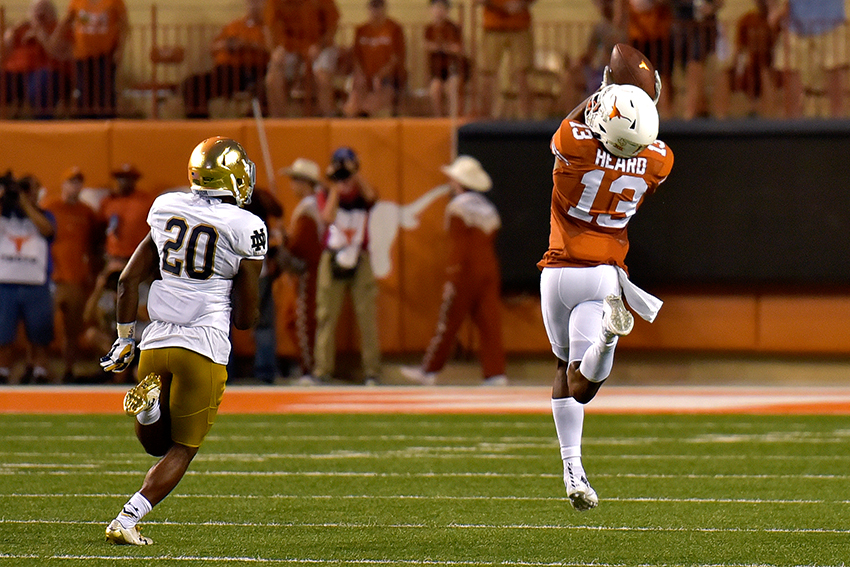 Jerrod Heard can do it all.

The sophomore wide receiver is a jack-of-all-trades for the Texas offense, a triple-threat option with the ability to run, catch and throw the football effectively.

“Heard is so athletic,” head coach Charlie Strong said. “He can do a lot of different things. I’d put him back there and let him run the kickoffs back because he’s so talented.”

But entering fall camp, Heard was nowhere near seeing the field. Despite starting ten games at quarterback for the Longhorns in 2015, he trailed freshman Shane Buechele and senior Tyrone Swoopes on the depth chart.

So rather than squander a season on the bench, Heard decided to make a change. The Guyer high school product chose to translate his skill set to another position, moving out wide after being under center.

“[Heard] said to me, ‘Coach, I just want to play,’” Strong said. “And I said, ‘So you tell me where you want to play and I’ll get you on the field, because you’re too good of an athlete to be sitting on the sidelines.’ So he chose wide receiver.”

Heard’s transition to wideout was eased by his time as Texas’ quarterback. He spent all of spring and summer camp in the quarterback’s room, learning offensive coordinator Sterlin Gilbert’s system inside and out. Instead of a having a blank slate upon moving to wide receiver, Heard held a treasure trove of knowledge.

“It was very advantageous for him,” Gilbert said. “When you start [with the quarterbacks], you know from a scheme standpoint you really get everything… He’s really honed in, he’s really focused, motivated, and determined about being a really good receiver.”

Texas’ depth at wide receiver was one of its greatest assets heading into the season, even before the addition of Heard. The Longhorns feature sophomore John Burt — who led Texas with 111 yards receiving in week one — and junior Armanti Foreman, both of whom were key cogs for the Longhorns offense in 2015. And in addition to their veteran receivers, the Longhorns brought in a pair of four-star recruits in Devin Duvernay and Collin Johnson.

But Texas’ bevy of receivers didn’t phase Heard. He entered the final two weeks of fall camp ready to learn a new position, even embracing contact drills after relieving himself of the black, non-contact jersey worn by quarterbacks.

“The day they took the black jersey away, I’m not going to lie, I was kind of scared because the DBs, they loved it,” Heard said. “It was pretty intense. I got hit a few times and I got to lay some hits on them. It was real fun though.”

Heard’s position change has already paid dividends. He caught two passes in week one against No. 18 Notre Dame, including a 68-yard reception in the first half. Strong praised Heard’s ability to adapt to a new position, and his willingness to help the team.

“[Heard] has an unbelievable attitude,” Strong said. “Now you see where this team is headed because now you’re getting guys who are very unselfish.”

Jerrod Heard can do it all. But for now, he’s focused on just one thing — being a wide receiver who can consistently contribute to the Texas attack.

“ I feel like I’m really coming into my game and the style of receiver that I wanted to be,” Heard said. “I just want to be that reliable receiver for those quarterbacks to throw to.”