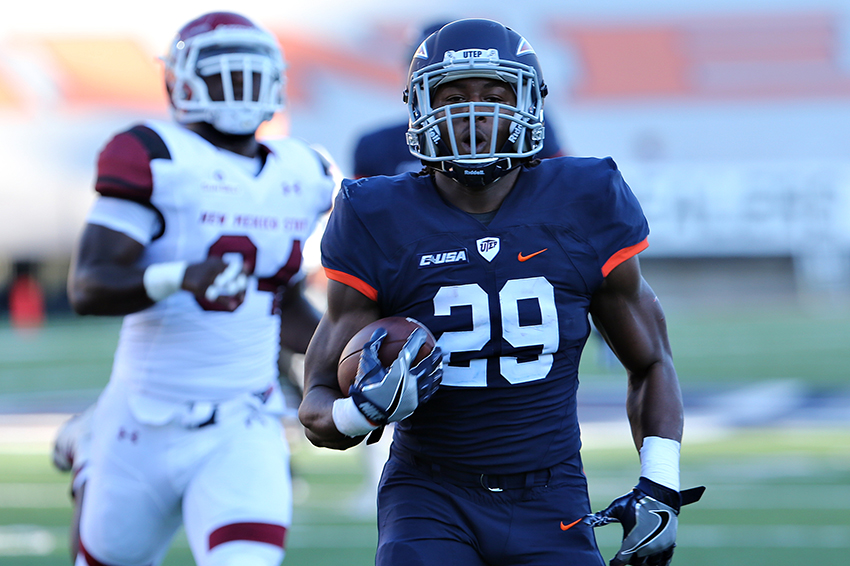 Jones received a medical redshirt after tearing his right ligament in the Texas Tech game last year. Before going down in the second half, Jones had rushed for 139 yards, including a school record 91-yard scamper. Eleven months of rehab later, he is ready to take the stage as one of UTEP’s top playmakers on offense. The 5-foot-10, 205-pound running back not only has the speed, but also isn’t an easy tackle. In 2014, Jones rushed for 1,321 yards, averaging 5.5 yards per carry and has put up the numbers against teams outside of Conference USA in the past.

Starting with his freshman year in 2014, Jones was already making an impact with 55 tackles on defense, second most on the team. During his sophomore year, he nearly doubled the number, leading the team with 93 tackles while also recording the second most tackles for loss in Conference USA. The 5-foot-11, 225-pound junior is capable of testing the Longhorns’ fast-paced offense.  A former member of a state-qualifying track team in high school, Jones has the speed of a running back, which accounts for a sneaky, dangerous pass-rush and a lot of hard hits.

Standing as one of the tallest on UTEP’s roster, the 6-foot-4, 265-pound tight end is hard to overlook. He is dangerous as both a blocking and receiving tight end. As a blocker, Plinke led the Miners to three games with over 200 rushing yards. Plinke also added 37 receptions for 405 receiving yards with a career high of four receptions for 87 yards against Texas Tech. For a team that doesn’t have much of a passing game, Plinke can be one of UTEP’s few receiver targets.

Junior Devin Cockrell has the experience and the numbers to make an impact on defense. In 2013, he led the freshman in Conference USA with 76 tackles. He continued as a starter his sophomore year, recording 52 tackles in addition to an interception and two sacks. After being named honorable mention Conference USA for both years as a starter, Cockrell suffered a knee injury prior to last season. After receiving his medical redshirt, the 6-foot, 200-pound Cockrell still has two years left of eligibility. He will return as one of the top threats on defense against Texas this weekend.