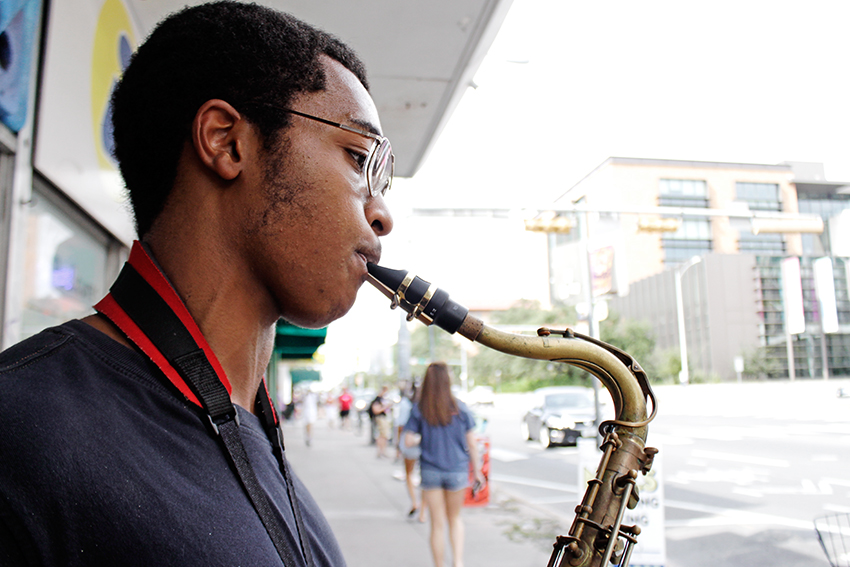 The homeless man coughing, the uproar of car horns and the whir of hurried pedestrians make up the Drag’s soundtrack. Among the noise, jazz performance sophomore Andre Reed plays his saxophone on Guadalupe Street.

Reed has been playing sax since he was 11 and has no intention of slowing down.

“I can think about anything while I’m playing the sax, but the time that it feels the best is whenever I’m angry,” Reed said. “Whenever that moment happens, I’m really glad to have a saxophone in my hands. You can’t really go out on a street and scream because you’re angry. You can, however, go out on the street and wail on a sax. It’s the rawest way to express my emotions.”

Reed started playing on the street this summer. The only live shows he hadplayed before were for high school band competitions.

“Sometimes you just got to go out and do it,” Reed said. “Whenever I go out and play, I feel scared. That fear is always going to be there, but you can’t let it affect you.”

Recently, Reed quit his job at a telemarketing agency and has since focused on perfecting his craft. He hopes a window opens up for him along the way.

“I’m just trying to practice and wait for time to pass,” Reed said. “I’m waiting for opportunities to come.”

When passersby approach him on the street, Reed tells them he hopes to one day play for a live audience that shares his love for jazz.

“I play at the HEB at Hyde Park all the time,” Reed said. “It’s always nice to play for an older audience because they have a deeper appreciation for jazz.”

Music studies sophomore Jose Flores, one of the Reed’s closest friends, said he believes his talents and passion will make him successful. Flores said he thinks a true musician is more than an instrumentalist and that Reed fits this classification.

Flores, who met Reed during their freshman year, often jams out in Reed’s apartment. While he said Reed is talented in music production and playing the drums, the thing he admires most is Reed’s passion. This summer, Flores noticed a correlation between the emotional messages in Reed’s Facebook posts and his music.

Jazz studies professor John Mills said Reed is in the transitioning phase between playing music as a hobby and making a career out of it.

“Everyone has their particular strengths when coming to the University,” Mills said. “When it comes to Andre, his music is engaging and his sound is warm and personal.”

Reed said he still has many things he wants to accomplish during his time at UT.