Texas can’t be complacent with ranking, outside praise 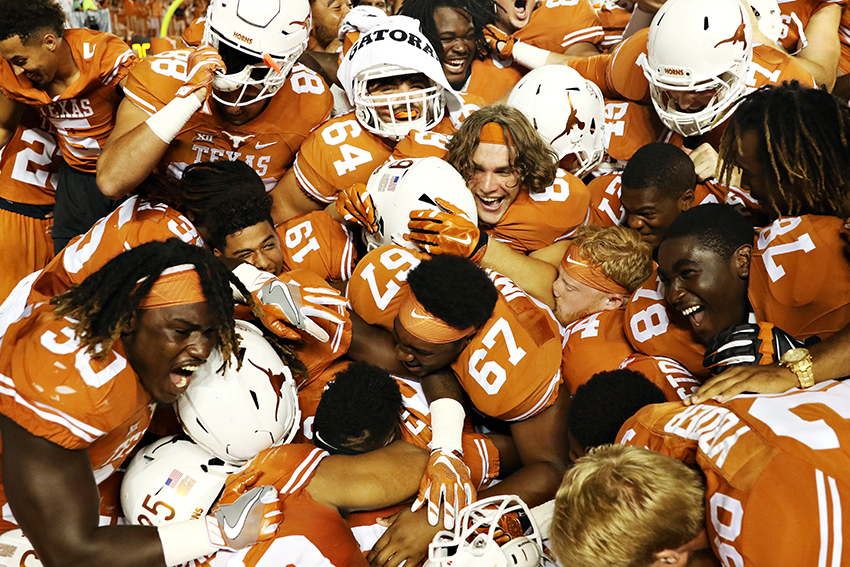 Over 11 million people tuned in when Texas took on No. 18 Notre Dame last Sunday. And a good number of those viewers heard when ESPN’s Joe Tessitore exclaimed “Texas is back, folks” as senior quarterback Tyrone Swoopes dove into the end zone for the win. The national media followed suit, bumping the Longhorns from outside the top-25 to No. 11.

But Texas still has a long way to go. Head coach Charlie Strong said one game “doesn’t make a season.” And his staff must stick to that philosophy for the team to avoid a major letdown.

“Yesterday people said you were nobody, now all of a sudden you’re somebody,” defensive coordinator Vance Bedford said. “So forget about what people are telling y’all, the pats on the back. One day they love you, the next day they’ll put you in the outhouse. So let’s not worry about all of that.”

Longhorn coaches and players have said all the right things so far. They emphasize there is still work to do on both sides of the ball and they can’t buy into the outside praise — especially when they’ve seen hype crash and burn before.

Last year, Texas was in a similar position in October after beating then-No. 10 Oklahoma at the Red River Showdown in Dallas. National experts were quick to proclaim the program was turning the corner after the upset. But the team took one step forward and two steps back: the Longhorns lost 24–0 to a two-win Iowa State team just two games later.

Bedford said he won’t let his players get ahead of himself. He said he’s “past” the Notre Dame victory, and he’s working to fix a defense that surrendered 47 points to the Fighting Irish.

“If you’re in the defensive meeting room, there’s not a doubt in their minds that we’re not back,” Bedford said. “This means as much to me as anybody walking around that we beat Notre Dame at home on national television … [But] we won one football game. That doesn’t mean a whole lot.”

Strong said he’s pinpointed specific corrections for Texas to work on. He emphasized the need to cut down on penalties, dropped passes and defensive issues — especially run defense.

The third-year head coach said the win won’t mean anything unless the team builds on it.

“You have to get better from game to game,” Strong said. “You’ve got to take this game, correct the mistakes, move on to the next one, and we can’t have the same ones.”

“They scored 47 points — as a defense we clearly got some work to do,” Hughes said. “[We just have to] stay focused. We all know what we’re capable of now. As long as we stay focused and do our job.”

Texas will need that focus with a tough schedule looming. After taking on UTEP on Saturday, the team will head to the West coast to take on California before back-to-back games against ranked teams in No. 22 Oklahoma State and No. 14 Oklahoma.

The Longhorns flashed the ability to become something special against Notre Dame. And even with fans and the media singing their praise, they must keep playing with a chip on their shoulder.

“I prefer the underdog [role] going into the game,” Hughes said. “People doubt you, and then you prove them wrong.”