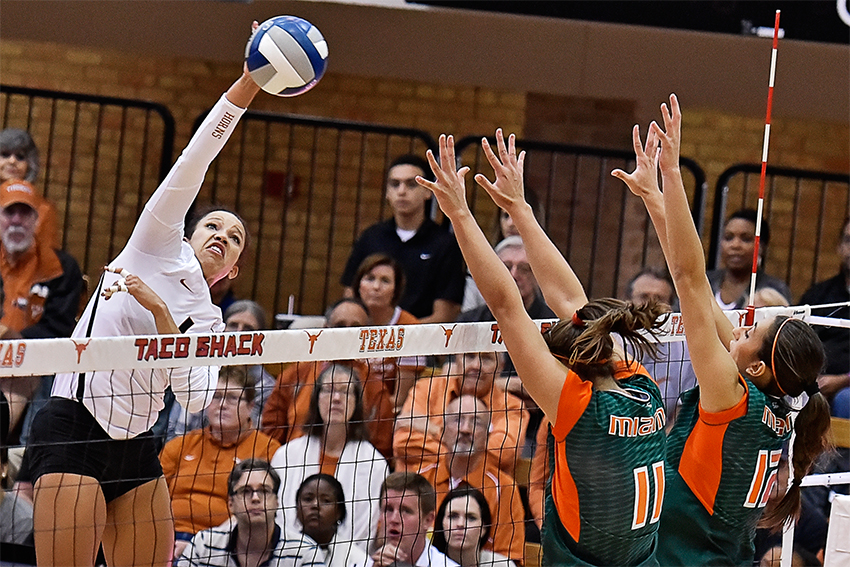 Although No. 3 Texas is loaded with several returning players from last year’s Final Four team, freshman outside hitter Micaya White has emerged as a key player in Texas’ recent four-game win streak.

The Frisco, Texas, native claimed Big 12 Freshman of the Week honors Monday, becoming the first Longhorn to earn the honor since Yaasmeen Bedart-Ghani last November. She also ranks second on the team in kills with 73 but continues to strive for a higher level of play.

“I am just trying to compete at a high level, and I’m just taking it match-by-match,” White said. “It shows that I’m adjusting and my team is helping me a lot. I’m learning from my teammates and they’re supporting me right now.”

Behind White’s emergence, Texas picked up four home victories and three consecutive sweeps since the team fell to No. 1 Nebraska on opening weekend. The Longhorns look for similar success against Colorado State in Fort Collins, Colorado, this week. They face the Rams on Friday night at 8 p.m.

“[Coach Jerritt Elliott] tries to make us have the same mentality as if we would at home,” White said. “We have the same preparation and the same routine, which is really important — trying to get into something daily and not change it.”

Excluding neutral site games, the program has won 31 out of 32 road games since 2013. The lone defeat occurred in Fort Worth last October when the Longhorns fell to TCU, 3-0.

Texas swept the Rams 3-0 in Austin in 2015. Colorado State has struggled in the head-to-head series; the Rams are winless in seven matches against Texas over the span of 32 years.

Colorado State is 4–2 this season. The Rams won their first four matches but dropped their last two, including a 3-0 sweep to UC Santa Barbara.

The Longhorns move on to face Wichita State (3–2) on Saturday. The Shockers lost to Big 12 foe Iowa State in their opener and will face Texas for the first time since 2013, where the Longhorns won 3-2.

Texas has two non-conference matches remaining after this weekend before the competition intensifies midseason.

“I think we will continue by taking it point-by-point and game-by-game,” White said. “It’s been helping us a lot, not worrying about the next game, but just taking each game as an opportunity to get better.”