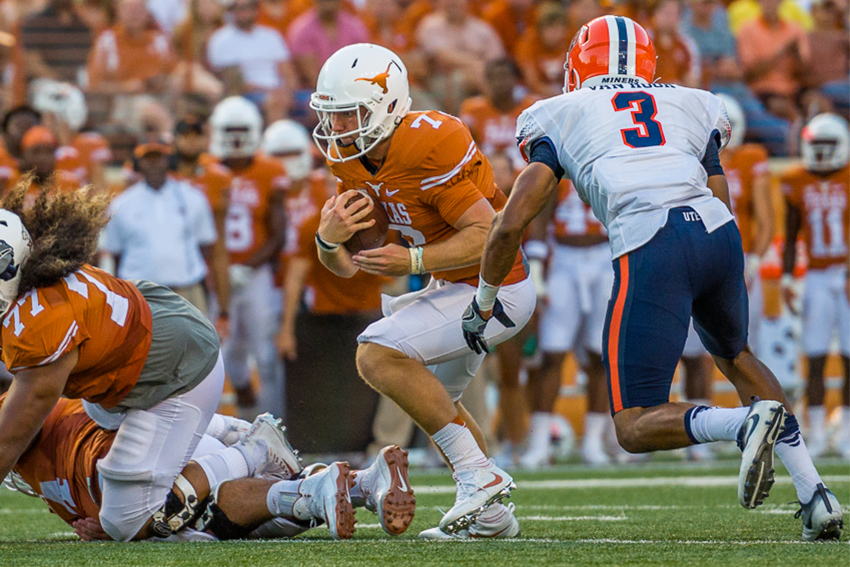 The No. 11 Longhorns hope to continue their momentum at home against UTEP. The team picked up a signature win in week one against No. 18 Notre Dame.

Texas also looks to defend its No. 11 ranking — the team's highest since 2012 — while the Miners attempt to pick up a massive upset on the road.  A win would mark the Longhorns' first 2–0 start since head coach Charlie Strong joined the program in 2013.

After UTEP went three-and-out to start the game, the Longhorns looked to get on the board within the game’s first four minutes.

Senior wide receiver Jacorey Warrick appeared to score on a wide-receiver screen from freshman quarterback Shane Buechele. However, under further review it was deemed that Warrick fumbled the football. UTEP regained possession and began at its own 20-yard line.

But Texas’ offense wouldn’t be denied for much longer. After forcing a three-and-out for the second-straight series, Buechele marched the Longhorns down the field for a touchdown. The freshman connected with sophomore wide receiver Jerrod Heard from 29 yards out, giving Texas a 7-0 lead.

Texas’ defense shouldered the load in the first quarter, holding UTEP to just 22 yards on its first four drives. The Longhorns special teams came through as well, blocking a UTEP punt to gain field position at the Miners six-yard line.

However, the Longhorns couldn’t find the endzone following the blocked punt. The miner denied freshman running back Kyle Porter on a third-down run to the endzone, and Texas settled for a field goal. The Longhorns led 10-0 at the end of the first quarter.

UTEP would make it a game in the second quarter. After a banged-up Longhorns offensive line allowed back-to-back sacks forcing a punt, Miners senior running back Aaron Jones found the endzone from 51-yards out. The NCAA’s leading rusher heading into week two, Jones broke his first run of the night for over ten yards on the score.

Texas tacked on 10 consecutive points following Jones’ touchdown scamper. Kicker Trent Domingue gave the Longhorns a 13-7 lead with a 42-yard field goal with under five minutes to play in the first half. Buechele then led the Longhorns down the field for their second touchdown of the game, connecting with Warrick from nine yards out.

Final update (9:45 p.m.): Texas extended its lead quickly in the second half, going up 27-7 on a 1-yard touchdown run from sophomore Chris Warren with just over eight minutes to play in the third quarter.

The Longhorns would strike again just two minutes later, this time through the air. Buechele connected with junior Dorian Leonard from 46-yards out and Texas took a commanding 34-7 lead. The touchdown toss was Buechele’s third of the night.

After a slew of punts — and sacks by the Texas defense — the Longhorns continued to pour it on in the fourth quarter. Buechele found Heard in the endzone for the second time tonight, this time from seven yards out. With nine minutes remaining, Texas led 41-7.

With the result solidified, Texas ran out the clock to complete the 41-7 victory. The Longhorns improved their record to 2–0 with the win before they head to west for a week-three battle at California.