Three arrested in West Campus in connection with fraternity shooting 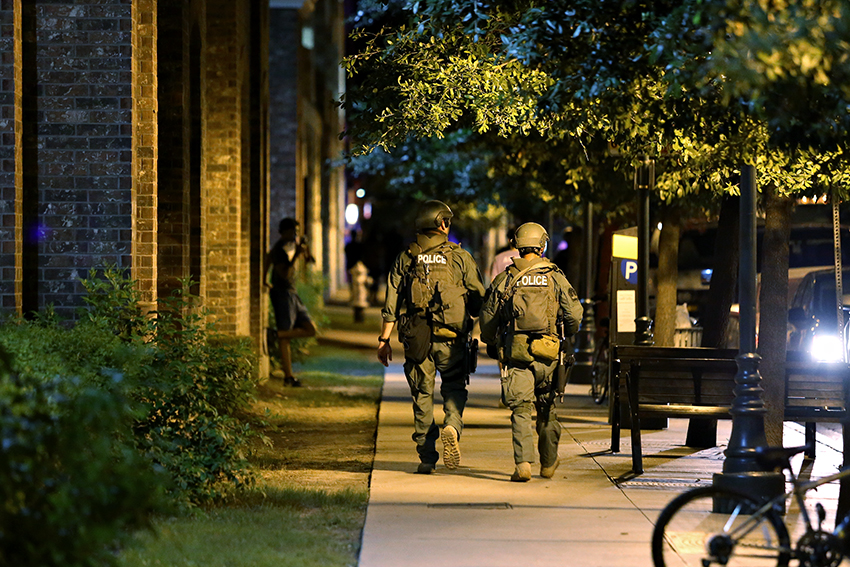 Three arrests related to the Sigma Chi fraternity shooting early Sunday morning were made at 26 West apartments at around 11:30 p.m., according to an officer on the scene.

The shooting at the Sigma Chi house left a security guard injured. The Austin Police Department responded to gunshots at 27th Street and Nueces Street at about 3 a.m.

The guard, who was working at a party at the fraternity house, was transported to University Medical Center Brackenridge and the injuries sustained are not life-threatening, according to Cindy Posey, associate director of communications for university operations.

An APD press release said one of the suspects was asked to leave the party, and when the suspect returned, an altercation led to the shooting.

A little after 11 p.m. Sunday, Austin Police Department SWAT Team officers shut down the intersection of 26th Street and Rio Grande Street, according to eyewitnesses of the arrests.

Rueda said the SWAT officers ordered the suspects to come down with their hands up.

“Seeing that in West Campus is really just alarming,” Rueda said. “I saw the guns on them and the shields, so I was pretty terrified.”

Nolan Glubke, a member of the fraternity who was not present at the house during the shooting, stood in front of the Delta Delta Delta sorority house and joined a crowd of onwatchers who clapped and cheered as the arrest took place.

“Really the only thoughts that I have are they got what they deserved,” Glubke, a human dimensions of organizations sophomore, said.

An officer inside the complex’s premises said at least one of the suspects in the shooting was arrested Sunday night, although whether all three arrests were related was not clearly determined.

This story has been edited since its initial publication to reflect the accurate residence of one of the interviewees.