Bevo XV selected as ‘great representative’ of the Longhorn breed 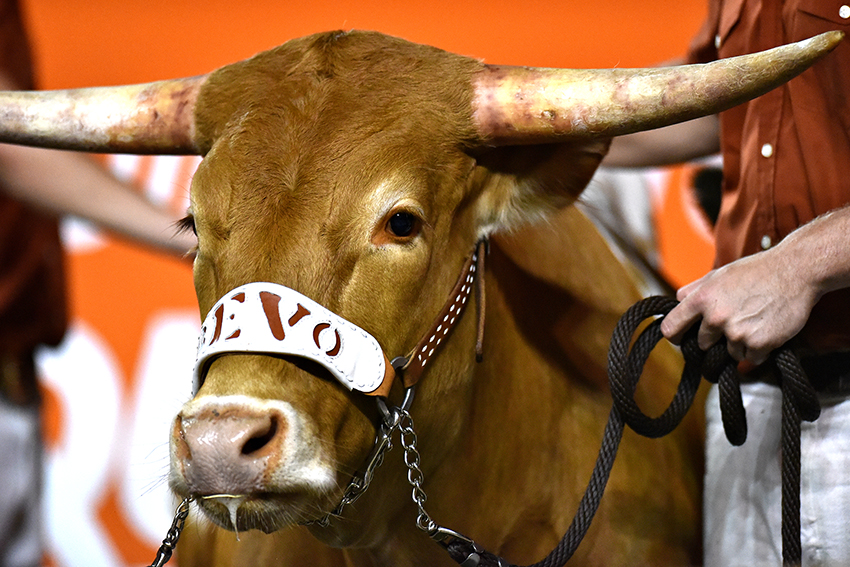 The record-breaking crowd had plenty to cheer about as Texas topped the Fighting Irish 50–47 in a double overtime thriller. But one of the largest ovations came before the Longhorns even took the field.

Just minutes before kickoff, Bevo XV trotted out from the tunnel in the south end zone, bringing Texas fans to their feet for the first of many times throughout the evening.

“It was such an exciting time for the University and everyone as Longhorn fans,” said Jack Eltife, a senior corporate communications major and handler of Bevo XV. “To introduce him to 100,000 people is electrifying, it’s incredible … he handled it like a champ.”

Brennes, 38, along with six other current and former Silver Spurs manned the selection committee. He said he personally looked at over 300 steers throughout the process.

“[You realize] you’re picking a symbol of the University,” Brennes said. “You’re about to pick a Longhorn steer to become the most famous Longhorn steer in the world — that’s probably the coolest aspect of it.”

Brennes and the selection group looked for very specific qualities in their search for a new Bevo. On the exterior, a Bevo must be from Texas, young and orange in color. But its most important characteristic is its personality.

“We’re looking for an animal that has the right temperament and disposition,” Brennes said. “We don’t drug Bevo, so we need one that is comfortable in the environment, comfortable being with people and comfortable with noise.”

The group picked its new Bevo in May. Registered as Sunrise Spur, Bevo XV is a 19-month-old, 1,100-pound steer from the Sunrise Ranch in Liberty Hill — the same ranch that cared for Bevo XIV.

Sunrise Spur is one of the youngest Longhorns to be named Bevo in the mascot’s 100-year history. Brennes said breed experts singled Sunrise Spur out for his youth, appearance and approachability.

“They thought he was a great representative of the breed,” Brennes said. “He went to Longhorn shows and won everywhere he went … he’s really approachable and not fazed by noise at all.”

Brennes wasn’t sure how big Bevo XV will get — he said the steer is “like a person” in that he’ll continue to grow and mature at his own rate. He said he thinks Longhorn fans will enjoy “watching Bevo change from year-to-year.”

But his handlers believe the young steer already stands out for his maturity, and they were confident he’d handle his debut well. Elfite said the Silver Spurs started training him about three months before the season. They used various techniques, including using loud sounds like air horns, to help him adjust to the noise of a 100,000 fans.

However, according to Elfite, the key to keeping Bevo calm is ensuring the steer is comfortable with his trainers.

“The biggest thing is just going out to the ranch, spending time with him and getting a relationship with the animal,” Elfite said. “He starts to recognize your voice and your touch and begins to have a bond with you.”

It didn’t take long for Bevo XV to win the hearts of Longhorn faithful. And the Texas players couldn’t hold back their excitement for the new mascot, either.

Senior quarterback Tyrone Swoopes said the new, youthful Bevo is a good metaphor for the football team, which features a variety of young talent.

“He looks kind of young,” Swoopes said. “But he’ll grow just like this football team, and it will be great.”