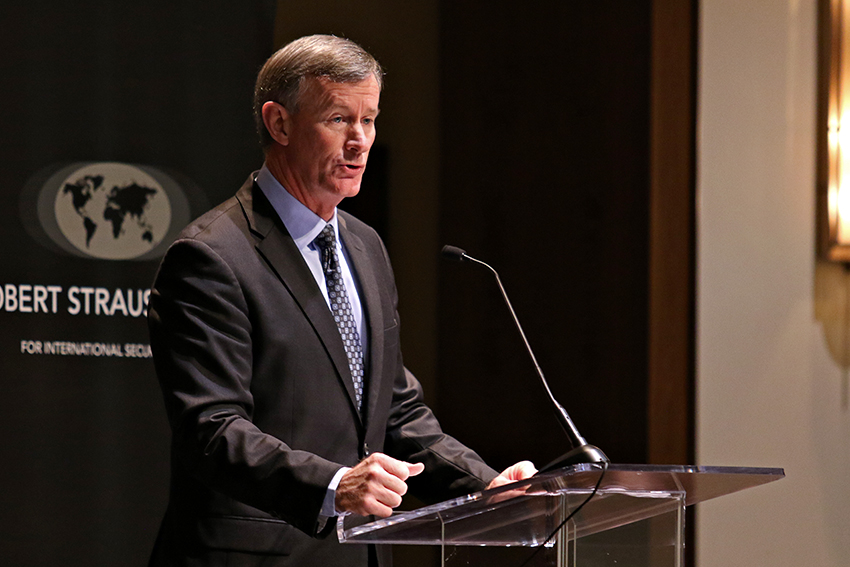 In an exercise of his First Amendment right to peaceful protest, Colin Kaepernick took the knee during the national anthem on Aug. 26, and plans to do so in every game this season. Now, a few weeks later, his protest against the institutionalized racism in America has sparked both ignorant criticism and deserved applause. The most recent opponent to the protest is UT System Chancellor — and former Navy SEAL — William McRaven.

In a statement given on Aug. 29, he implored that UT presidents and athletic directors encourage their athletes to stand for the national anthem with their hands over their hearts. In not doing so, he said, athletes would be “disrespecting everyone who sacrificed to make this country what it is today.”

McRaven’s call for UT athletes to stand at attention during the anthem calls an important question to the table: Should University faculty police students’ First Amendment rights?

“We’d probably all agree that each person on a team has an individual right to exercise free speech,” Penne Restad, a distinguished senior lecturer in UT’s History Department, wrote in an email. “The other position to examine is if, when a member of a team makes a statement, can he manage to speak only for himself?”

The answer to this question is yes: A single person can assert their individual constitutional right during a sporting event without impinging the same rights of his teammates. Headlines focused on Kaepernick rather than his team coupled with the lack of action on the part of the NFL shows that his protest is indeed taken as an individual protest rather than a team endeavor.

Exercising one’s right to protest during the playing of the national anthem is a long-held tradition in American sports. The anthem originally emerged in sporting events in 1862 as a way to reinforce patriotism and came back once more in the 1960s to combat the backlash of Vietnam. Protesting the anthem is not to take a stance against our troops but to exercise our rights that our troops fight to defend. As Restad wrote, the protesters “do not intend to show disrespect, but rather hope to raise questions that go to the heart of America’s value of equality and justice for all.”

McRaven shouldn’t have called for athletic directors to sway their athletes’ assertion of their first amendment rights. Public universities should not hinder their students’ constitutional rights by imploring them to act a certain way. UT athletes should choose for themselves how they want to exercise their constitutional rights, and whether they want to take a stand, or rather a knee, alongside Colin Kaepernick in the name of Black Lives Matter.