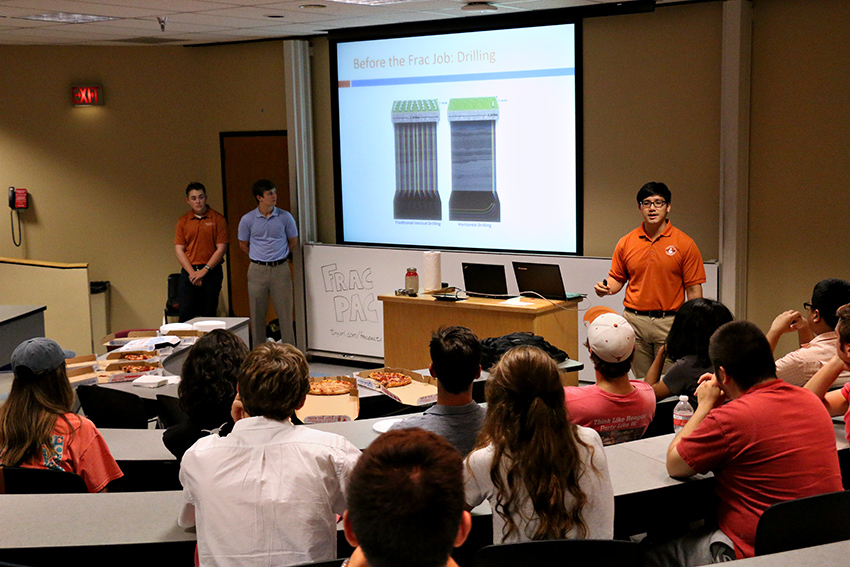 The meeting featured a presentation from the Hydraulic Fracturing Public Awareness Campaign, a UT organization that seeks to reinvent the public image of the oil and gas industry. Frac PAC does social volunteer work throughout the Austin community and puts on informational presentations at local high schools and around the UT campus.

Frac PAC’s goal is to bring awareness to the benefits of hydraulic fracturing while providing forthright explanations about the environmental risks involved.

“There’s lots of negative sentiment about oil and gas and a lot of it is just unwarranted,” said Leo Huang, petroleum engineering junior and president of Frac PAC. “We’re not really trying to preach any kind of political message, we’re just trying to educate people and help them achieve a more well-informed opinion about the oil and gas industry.”

Frac PAC discussed common misconceptions about fracking during the meeting. They debunked the idea that fracturing is a new technology, stating that hydraulic fracturing has been around since 1865 and discussed the economic reasons for fracturing. Oil and natural gas are in high demand in the US and a shortage in either could drastically impact the economy.

“It’s important for political organizations to have conversations about these kinds of issues,” said Jordan Seibert, business freshman and a new member of College Republicans. “I personally didn’t know anything about fracking going into the meeting, but now I feel like I know a lot.”

College Republicans were founded in January of 1950, making them the oldest political organization at UT. Their goals are to foster a spirit of conservative activism on campus and promote the values of the Republican Party.

The organization brings in influential political speakers, holds rallies and social events and assists with Republican campaigns in the Austin area. The general meetings are open to anybody, but those who are passionate about the organization are encouraged to become members.

“Regardless of your political affiliation, I would invite anybody to come to one of our meetings and see what we’re all about,” said Andrew Jackson, supply chain business senior and president of College Republicans. “Having diverse opinions helps you make better decisions and helps you remain more informed so you’re not in a state of groupthink.”

College Republicans host meetings every other Wednesday at 7 p.m. in UTC 1.146.