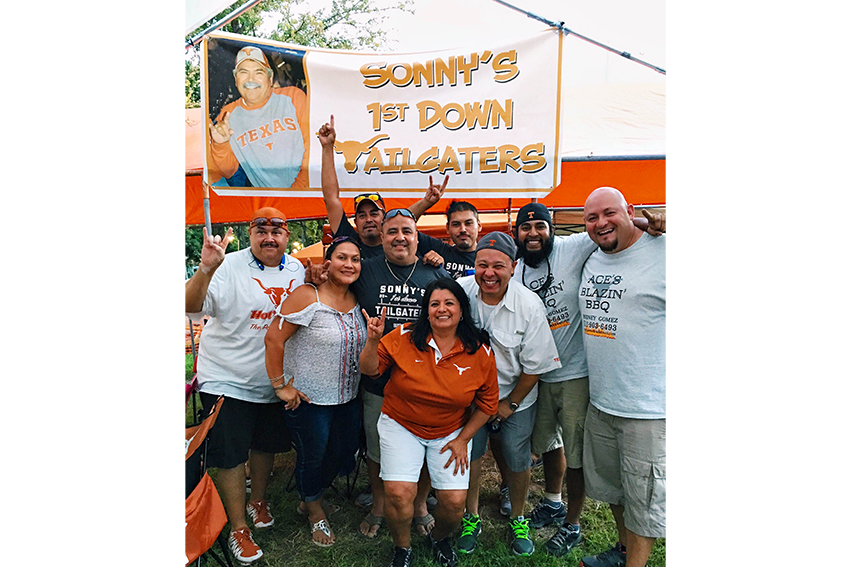 Among a sea of cheering tailgaters, dozens of fans raise a glass in the air and throw back their drinks in unison. First and 10.

Since the 2007 Thanksgiving game, when Augustine “Sonny” Bermea nudged his son-in-law Manny Rodriguez and told him to drink after the first down, this group of tailgaters have kept the tradition alive.

Sonny’s First Down Tailgaters began as a collaboration between Rodriguez and his father-in-law, but when Sonny, an Angleton-born family man, died from gastric cancer in 2009, Rodriguez was left to continue the tailgate in his honor. Nearly a decade later, the tailgate still embodies the family’s Hispanic roots and dedication to Texas football.

“Tailgating took a back seat in remembrance of Sonny, but my wife and I continue his tailgate as a labor of love and his legacy continues to live on,” Rodriguez said.

According to Rodriquez, Sonny was a man with a pure heart and strong work ethic.

“Sonny knew no strangers, everyone was welcome and he made everyone feel like part of the family,” Rodriguez said. “He had one of those laughs that would cause his belly to ache and his eyes to water.”

The tailgate began with family and friends, but soon grew in popularity. Strangers interested in getting a flavor of Hispanic culture are welcomed with open arms, just like Sonny would have wanted.

“The foundation and core of this tailgate is predominately of Hispanic culture [and] people coming together to cross borders,” Rodriguez said.

Students and fans take pleasure in being a part of a tradition that has lasted through the years. Erick Pecina said she returns to Sonny’s First Down for the rhythmic music, dancing and food.

“I always feel so welcomed by everyone and I love meeting new people,” Pecina said.

Neurobiology senior Andrea Solis has attended plenty of student organization tailgates and said she enjoyed herself, but never actually watched a game at a tailgate. Venturing out of her comfort zone last weekend, she made her way to Sonny’s First Down.

“I immediately became engulfed by the friendly atmosphere and the homey spirit of everyone surrounding me,” Solis said. “But nothing beats the excitement and pride every single person at that tailgate felt and shared together when we witnessed the winning touchdown for UT against Notre Dame.”

Individuals from Killeen, Houston and Angleton make the trip to Austin to participate. Rodriguez said even though there is a dedicated group of tailgaters, its always special when an out-of-towner visits for the first time and asks about Sonny.

“This is our story about family, friends, love and dedication,” Rodriguez said. “We’ve never made this tailgate about us. We will always say this is his tailgate.”