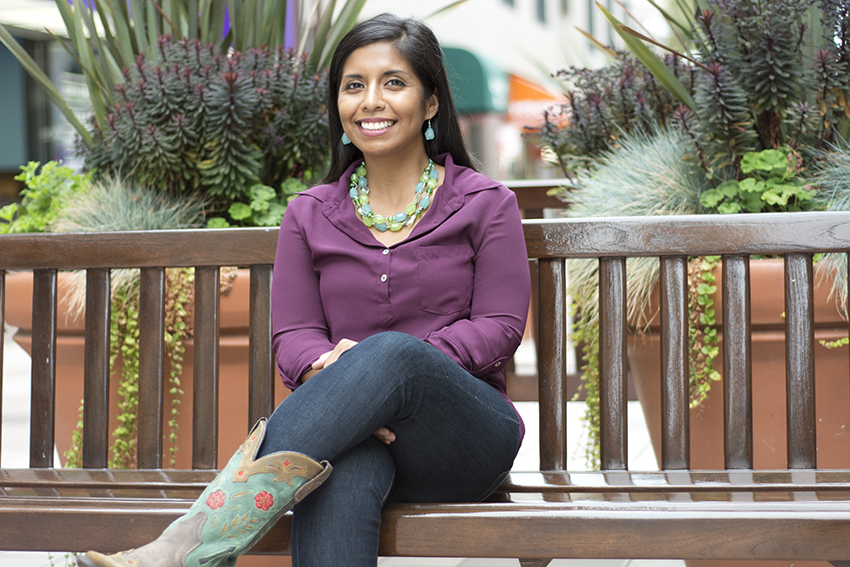 Ripped from the headlines, brutal stories of drugs, war and murder on the border became the subjects of alumna Natalia Anciso’s series “Flora and Fauna.”

One of the pieces, “Madre y Hijos,” shows a grieving mother kneeling over the bodies of her sons, both covered in delicate flowers drawn in orange, red and purple colored pencils. The subjects in each piece of the series are carefully sketched in graphite, fading into the background as viewers first focus on the vibrant colors.

Anciso said the contrast between the harsh and the delicate, the beautiful and the painful, represents the complexity of being from the border. Raised in the small town of Mercedes in the Rio Grande Valley, Anciso’s family had been in the area for generations.

“My family, they’re very proud of being Texan; and we were Mexican, but being so close to the border, you try to disassociate yourself from [Mexicans]. It’s a really complex relationship,” Anciso said.

Anciso said she turned to her art to express the inner conflict she felt about her identity.

“My artwork became a place where I could heal and work out my feelings about home,” Anciso said. “I just wanted to articulate my experience through the art that I was creating and learn how to negotiate between these opposing viewpoints on a daily basis.”

After leaving the Valley to attend UT in 2003, Anciso said she struggled to adjust to a new life in Austin.

“Just the way I look has always been very hard,” Anciso said. “I have dark brown skin, I’m short, I can’t really assimilate. I’m usually the only person of color in a room. It’s not something that I can hide.”

But when she took a few Mexican-American studies classes, the identity she always felt conflicted about began to empower her.

“I realized there were artists out there that looked like me,” Anciso said. “Just seeing these people that actually had the title of artists that were making work that really meant something — it changed the way I looked at things.”

Anciso graduated in 2008 but wanted to continue her education and headed to the California College of the Arts in San Francisco to earn a Master’s degree. Despite being one of two Latinas in the program, Anciso said their adviser always mixed them up.

And as the only Latina in the art program, she said she felt the creative decisions she made were often met with unwarranted pushback. When presenting a project about her relationship with the border to the class, her professor challenged her with one comment: “You don’t know what you are.”

“He called me lazy during the critique where I have my classmates and peers in front of me,” Anciso said. “I remember thinking, ‘Of course Mexicans are the lazy ones.’”

She almost quit. Then she took a trip back home.

There, her cousin who had recently been released from jail showed her a piece of handkerchief art a friend had made there. The art form had roots to Chicano prisoners dating back to the 1940s. She felt drawn to it, and when she returned to school, she was confident in her choices, bolstered by the research and work she put into the idea.

“I couldn’t just be an artist, I had to prove it to people,” Anciso said. “I’ve had to work twice, three times, four times as hard as a lot of other people who have the title of artist. I had already embraced my heritage, but all of that criticism made me feel it even more. Just wanting to set an example and be some type of role model is what pushed me.”

Her latest series, “School,” focuses on the school-to-prison pipeline, and Anciso’s own experiences as an urban educator to students of color in California.

“A lot of my work is giving voice to the voiceless,” Anciso said. “The series I’m doing right now is about children of color in schools and them not having a voice. That is something that I experience on a daily basis.”

Since leaving school, Anciso’s work has been met with national acclaim. In the past few years, she’s been recognized in ELLE Magazine and Huffington Post, and this month she will appear as the only visual artist on TVyNovelas’ list of “Top 50 Latinos Today.”

“Even though we have this kind of complex self-hate in the Valley, I love having those two cultures,” Anciso said. “I love that duality, that being in between. I didn’t like it in the beginning, but now that I’m older, I love it. I’m proud to be Mexican. I’m proud to be Tejana.”