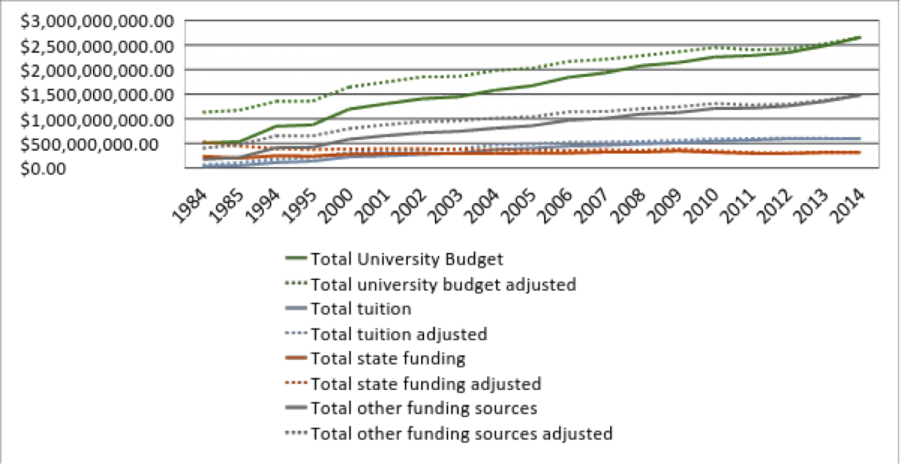 To start: Thank you, Lt. Gov. Dan Patrick, for your commitment to lowering tuition. And thank you for speaking directly to students and publishing in our newspaper; on past university issues (read: Campus Carry), y’all legislators never seemed eager to head up Congress Avenue and engage with us. The relationship between tuition and financial aid is an important conversation, and I appreciate your including students in it.

As I understand, you want to eliminate the statutory requirement that students’ tuition be “set aside” to pay for other students’ financial aid. And you want the Legislature to replace lost revenue. It is wrong, you say, that students pay for other students’ education. This “hidden tax” is especially egregious when students must take interest-laden loans for such a redistribution of wealth. When students go to college, they envision paying for their education — not someone else’s.

Your idea is commendable. For the reasons you list and others, education is a social good. A college degree is increasingly necessary for economic success. However, higher education is unique for means-testing its costs. Wealthier users of toll roads do not subsidize other drivers’ use, and middle-class consumers of municipal water do not pay extra so that impoverished Texans can pay less. If we wanted to ease lower-income people’s access to toll roads or water, we would do so via tax-funded subsidies. Why, I think you ask, is education different? Surely we could decrease tuition for everyone by replacing the “set-asides” with state funding.

I sincerely wish that your actions were consistent with your excellent idea. We cannot change the past, but I hope you bring your policies in line for the future.

We clearly agree on the necessity of financial aid. But your (failed) 2011 bill to eliminate set-asides contained no provisions by which the Legislature would match the lost revenue. In my first days of law school, I’ve learned you are offering us an “illusory promise”: a promise that is unenforceable due its lack of mutuality, where only one side is bound to perform. Only one end of the bargain would be mandated by the bill you proposed; we would stop setting aside our tuition, but students may or may not receive their financial aid. We would be at the whim of the Legislature to fulfill their half of the deal.

What is needed is both provisions in one bill: an elimination of the set-asides with a concomitant commitment by the Legislature to provide lost revenue. Even if you vigorously support increases in state funding to make up for lost financial aid resources in a separate bill, we have no assurance that your House and Senate colleagues will do the same. The provisions must come in the same legislative instrument, or not at all.

I can anticipate your response: We’ve already given more money to schools.

No, you haven’t. Not per student. And certainly not at UT.

Texas has more students than it did in 2004. It has even built new universities, so I’m not shocked that administrative costs went up.

Despite what you quote — that state funding for public universities increased by 40 percent from 2004 to 2015 — ­state contributions adjusted for inflation went down from 2005 to 2014 at UT by 13 percent.

But let’s go back to the good ol’ days. In 1985, in-state tuition cost $144 per semester. Since that time, tuition has gone up a lot. So has the size of our student body. So has funding from all other sources — except from the state.

Since 1984, state support for UT has decreased by 41 percent, adjusted for inflation. The state used to contribute approximately 47 percent of our budget, and now it contributes less than 12 percent. Whereas everyone else is chipping in to meet the increasing need of higher education, the Legislature is not. Why has tuition increased? The demands on the education system increased, and the Legislature didn’t step up to bat. Private donors filled some of the gap, and unfortunately, students and their parents filled much of the rest. Would you have preferred quality or quantity to suffer?

It is easy and politically convenient to rouse the student body by pointing the finger at our administrators. It is easy to measure success exclusively by graduation rates. But it is the Legislature, not those damn bureaucrats, where this buck stops. Even the set-asides you so decry are the source of a legislative bill — not University policy.

If you mean what you say — that higher education has become increasingly crucial to success — why has the Legislature’s commitment been stagnant in nominal terms and decreasing when adjusting for inflation? End this fiction, Lt. Gov. Patrick.

Stone is a first-year law student and a 2016 graduate of Plan II Honors, economics, English, government, and history.