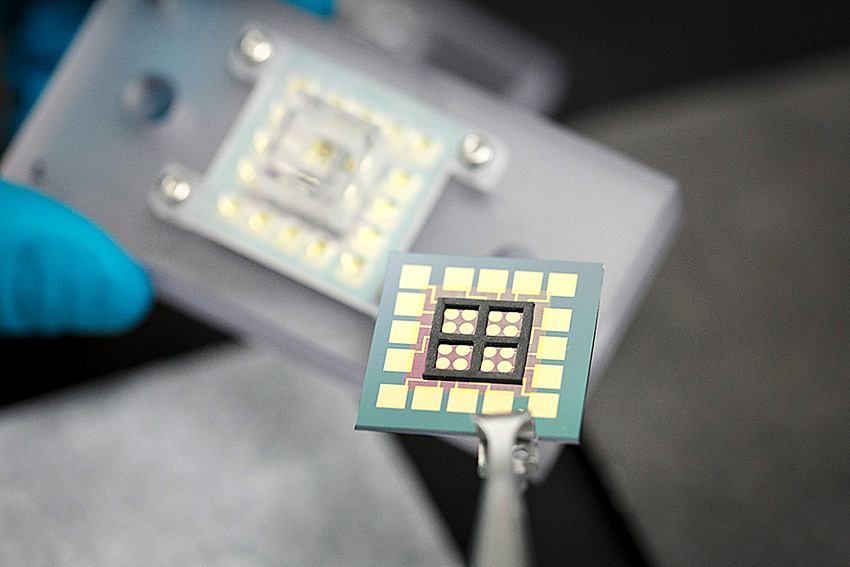 UT-Dallas physicist Jason Slinker has designed a computer chip capable of simulating human cells, which will be used to test the efficacy of anticancer drugs.

To use the chip, researchers apply DNA to its surface. Based on the information in the DNA, the device can replicate the conditions of a cell. Scientists can then administer drugs to the chip and use a connected device to analyze how successfully these drugs target cells.

Slinker, a UT Dallas associate professor of physics, began working on the device in 2007 as a postdoc researcher. In 2010 Slinker began collaborating with David Boothman, an oncology professor at UT Southwestern Medical Center who developed the anticancer drug betalapachone, which the team used to test their device.

Slinker said that the chip cannot simulate the whole cell, but it does simulate the nucleus which contains DNA, membrane, cytoplasm, and other cell components.

Part of the health of a cell can be determined by the distribution of various proteins and enzymes present in it, Boothman said. Cancer therapy drugs often use these differences in composition to kill sickly cells.

“The idea was to design a chip that could mimic how our drug works, and define the damage that’s created, as well as, how it might be overall repaired,” Boothman said.

Slinker said the chip features gold plating that conducts the electrochemical signals sent from a probe inside the DNA. As the DNA is damaged, the device, via the probe, monitors changes in current.

“Put a strand of DNA across two poles, just like a battery–and anytime there’s an alteration in the DNA, it gives off a signal between the two poles–when there’s damage created in the DNA, [Slinker] can actually see a signal by a change in the base pairs of the DNA–and then he can see when that DNA starts to be repaired,” Boothman said.

Boothman added that the chips allows researchers to measure the amount of damage done to DNA strands.

“To really explain where we’re going with this, it starts with the drug we developed,” Slinker said.

Boothman said that betalapachone targets cancers that produce a lot of the NQO1 enzyme,  an enzyme that is prominent in non-small-cell lung, pancreatic, breast, prostate and colon cancers.

“Essentially how [betalapachone] works, it interacts with certain proteins to generate peroxide that diffuses through the nucleus to attack the DNA inside,” Slinker said.

In order to test this drug, the team designed the chip to imitate the mechanics of a cell in real life.

“To actually produce what Boothman’s drug does in real life we found it necessary to reproduce those features of keeping certain proteins and elements separate from the DNA and allow the drug to work like it would itself,” Slinker said.

The cancer drug Boothman designed only targets cancer cells and does not damage healthy cells.

“When the drug hits those cells, it creates a unique free-radical mediated damage that kills them in a very tumor-specific way,” Boothman said.

Boothman said the drug is currently in two clinical trials with two more are already planned.

The device contains very precise measurement methods that could be applied to areas outside of cancer treatments — Boothman said he hopes to see the device used to detect DNA damage due to environmental stressors such as radiation or chemical exposure. Boothman added that they’re trying to manufacture a wide-spread measurable device similar to glucose monitoring devices.

“What [Boothman] has done is really focus on cancers that don’t have effective treatments,” Slinker said. “Anything to reduce mortality and improve the lifespan of patients would be welcomed.”