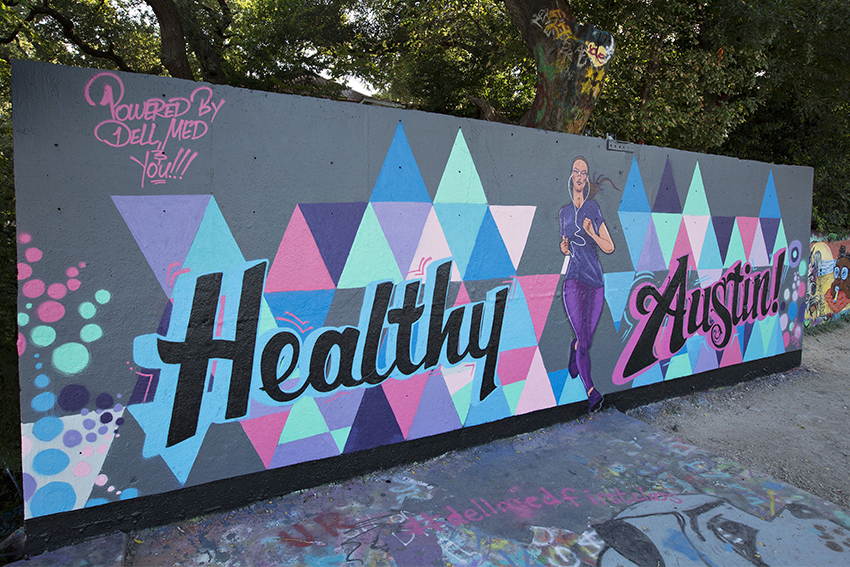 First-year Dell Medical School students partnered with local Austin artists to create a mural at the HOPE Outdoor Gallery that encourages people to become more comfortable with the medical community.

The school, which was funded by local taxpayers, wanted a way to thank the Austin community for their support and to strengthen the bond between community members and their doctors.

“We want to make sure that we are very engaged with our community,” said Mary Cope, assistant director of communications and content strategy for Dell Medical School. “That means helping improve their health outcomes, but it also means just showing them in small ways like this that we are part of the community.”

One of the main goals of the school is to make Austin a model health city, a goal demonstrated by the mural’s design, which reads “Healthy Austin.”

“We’re very much about the idea that health is an ecosystem,” Cope said. “We wanted to do something that showed we were a part of Austin and that had individuals at the
center of it.”

Students, along with Austin graffiti artists Truth and Mez Data, painted the mural Saturday afternoon. The team worked together to plan the design of the mural, which portrays the student’s ultimate goal for Austin — healthy and happy citizens.

“In the mural, we didn’t want any white coats,” first-year medical student Ariane Lemieux said. “We’re part of the community too, and so it’s really representing how we want to keep Austin healthy and our initiative to fulfill that dream.”

The painting of the mural was organized to integrate the new students into their community and to allow them to communicate with Austinites outside of the hospital.

“It’s really important for all the students to be involved with the community,” Lemieux said. “It’ll show that we’re people too, and we want to be part of everyone’s regular lives, not just when they’re sick.”

Although the mural is only temporary, the Dell Medical team hopes to continue contributing to the Austin community in more ways than improving health.

The school is also partnered with Keep Austin Beautiful, a nonprofit organization that works to clean and maintain the city and has been recruiting students to clean up parts of Austin.