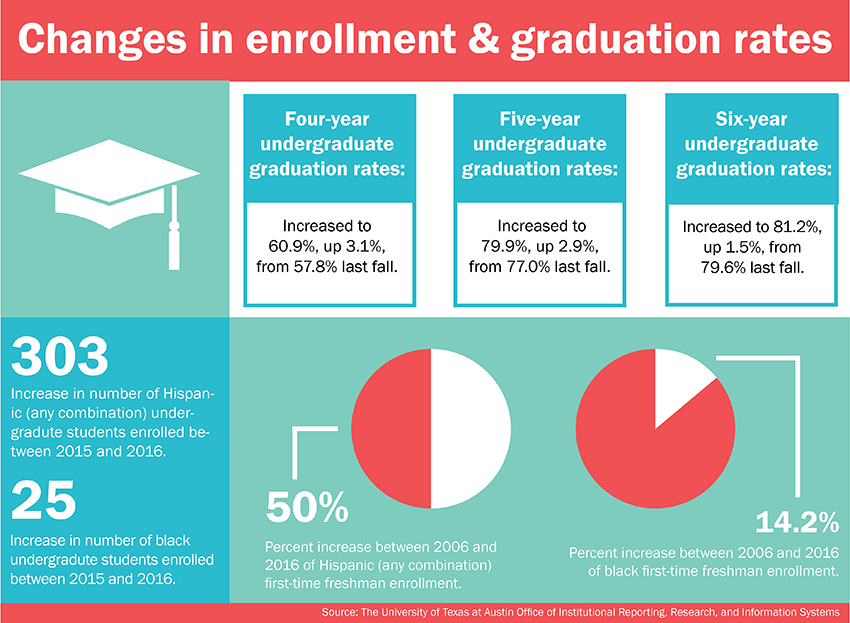 UT saw a higher four-year graduation rate and increased Hispanic and African American enrollment in 2016, according to a preliminary report released by the University Monday.

The Office of Institutional Reporting, Research and Information Systems prepared the report and the data comes from the preliminary enrollment report conducted by the University after the 12th class day of each fall semester.

“Making sure our students from all backgrounds graduate on time is critical to helping them achieve success and keeping down the costs of a college education,” President Gregory L. Fenves said in a statement. “I commend all the students who worked hard to stay on track, and everyone at the University who contributed to better serve the education of our students. We are also increasing diversity on campus, especially in light of the successful case in the U.S. Supreme Court, and the University’s upcoming Diversity Action Plan will help us make progress with this
important priority.”

Increasing minority enrollment and four year graduation rates is also one of the goals the 60X30TX plan wants to accomplish.

The Texas Higher Education Coordinating Board introduced the plan last year and its primary goal is to get 60 percent of people between the ages of 24 and 35 a college degree by 2030.

“Our efforts during the past few years are making a difference for our students,” Maurie McInnis, executive vice president and provost, said in a statement.

“Our student success programs help connect our students with resources and communities early on. These connections enable students to take advantage of the wide range of resources available on this campus. When students graduate on time, we know they enter the workforce better prepared, start earning income sooner and incur less debt. We’re going to stay fully focused to build on this momentum,” McInnis said.

UT President Gregory Fenves said at a May Board of Regents meeting 60X30TX complements UT’s goals to create an innovative classroom experience.

“This will help our students graduate in four years and aligns with the Texas Higher Education Coordinating Board’s 60X30TX strategic plan, under which students will complete college as well-rounded, educated citizens prepared for successful careers,” Fenves said at the meeting.

“As the largest producer of college graduates in the state of Texas, the University of Texas System accepts a great responsibility in this critical effort,” McRaven said at the meeting. “Texas can reach this important goal with the 60x30TX plan in place and the commitment of so many dedicated partners. The UT System eagerly accepts its vital role in this initiative.”