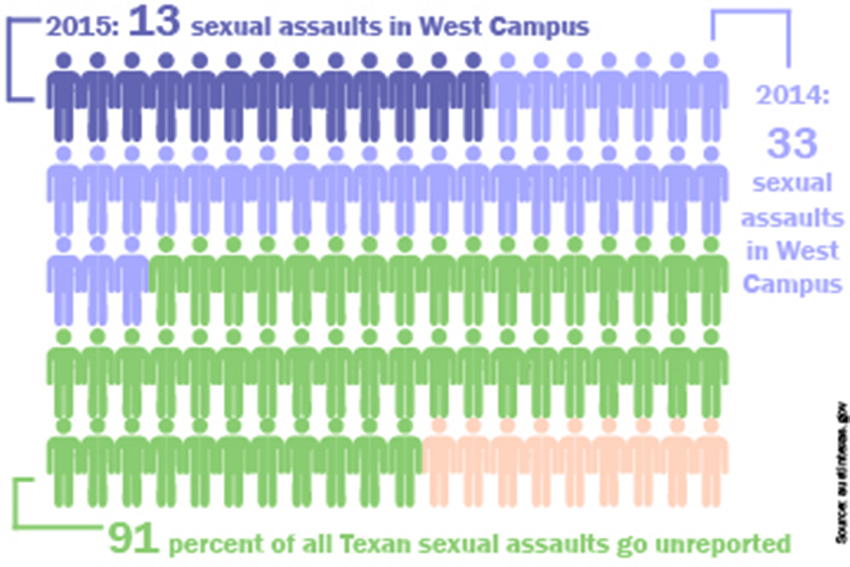 The amount of reported rapes in the West Campus area decreased from 33 in 2014 to 13 in 2015, according to crime reports released by the Austin Police Department.

Rapes between these years were cut down by over half, a significant change APD said is not easily attributed, and still requires further investigation.

“I don’t know why the numbers would change, I do know that sexual assault is one of the most underreported crimes that there are,” said APD Sergeant Sandra Benningfield. “That’s something that we always try to get out there — is letting people know that just because they’re a victim of a sexual assault they shouldn’t feel ashamed.”

Earlier this year a UT study — headed by Noel Busch-Armendariz, director of the University’s Institute on Domestic Violence and Sexual Assault — found 91 percent of sexual assault cases go unreported. Whether this is the mitigating factor contributing to the steep decline in rapes in the West Campus area is something Benningfield said is difficult to determine, but nevertheless likely.

“A 20 case differential in that area or any area is significant,” Benningfield said. “When the number goes down, I don’t think the number of rapes is going down as opposed to the number of people making the reports are going down.”

Samantha Carter, UT Police Department officer, reaffirmed the idea of underreporting playing a role in the decline of reported West Campus rapes, however, she added that educational awareness could have had an impact.

“It could either be the educational programs out there are making people more aware, so this is happening less,” Carter said. “It could also be that there’s just underreporting. It’s not something that I think we’ll ever specifically be able to know what’s causing the decline.”

Sexual assault awareness campaigns and educational resources such as SURE Walk or Voices Against Violence provide a cushion of support for victims or students who seek to learn more about self-protection, something Anum Moon, management information systems junior, said is essential to creating a thriving student community.

“It’s a bit of a relief to hear that … there’s a possibility of them going down, especially since this is a student environment that you want to feel safe [in] and you want to feel at home in a way,” Moon said.

Panic buttons or phone boxes much like the ones dispersed around campus are safety fixtures that Moon said could potentially increase safety if installed in the West Campus area, adding that although the rape numbers may be on the decline, many students do not report incidents to the police.

“Obviously there’s a lot of cases that are not reported, and for that, I feel like we have to do a lot of work in terms of getting people to feel comfortable to use those resources for them to report assaults or rapes,” Moon said.

APD will continue examining the crime data reported between 2014 and 2015 and the possible driving force behind the decline.