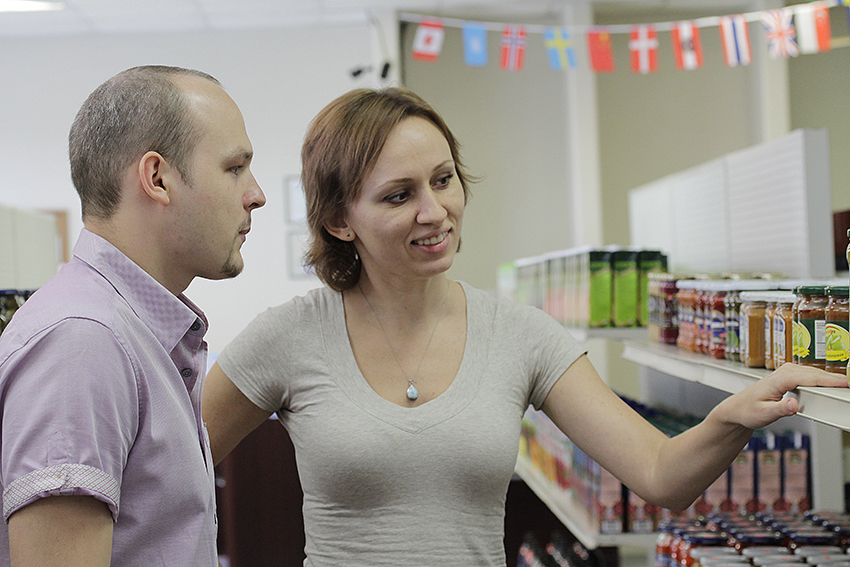 Flags from Russia, Ukraine and Poland flap in the wind outside the Borderless European Market.

When Sasha’s Gourmet Russian Market and Cafe left North Austin several years ago, they left a hole in Eastern European fare available in the city. But this August, the new market took its place. Like Sasha’s, the BEM sells a variety of Eastern European products not available in the U.S. such as tvorog (Russian cottage cheese), traditional Russian candie and mors (a Russian fruit drink.)

Co-owners Taras Klitchyk and Tatiana Bogdanovych said they decided to open the store after moving to Austin from Philadelphia, after they noticed Eastern European products were not as readily available here. Klitchyk, originally from Ukraine, moved to Philadelphia when he was 12 years old to give him better opportunities. Bogdanovych moved to the U.S. in 2008 from Russia and has been living in Austin for the last year and a half.

“The whole idea was sitting right there and somebody had to do it,” Klitchyk said. “It was an opportunity that somebody had to pick up because there are a lot of [Eastern European] people who already live here and a lot more moving into the Austin area.”

In 2002, Marina Potoplyak, a Russian food professor, moved to Austin, which she called “Russian food desert.” She said the city is doing much better now in terms of the availability of Russian products, thanks to the city’s expanding population.

“I think it comes with the growth of Austin in general,” Potoplyak said. “A bigger city, more ethnically diverse, more people with different backgrounds are coming to live here every day. I salute that development because it means more incredible food being available to you.”

Chemical engineering freshman Anna Pronko, whose parents moved to the U.S. from Russia, grew up using traditional ingredients offered in the store, but missed them when she moved to Austin. Pronko, who was taught by her parents how to make syrniki — pancakes made with eggs, tvorog and raisins — said she is more likely to make those traditional Russian dishes now that BEM is open.

One of the many Russian students at UT, Pronko is trying to stay in touch with her Russian heritage. Pronko was worried about losing parts of her culture by not being able to get Russian food or speak her own language, but at the new market, she’s found a taste of home in one of her favorite foods, tvorog. She’s also found some fellow Russians that speak her language.

“My biggest fear is losing the language, because I’ve seen that happen to people,” Pronko said. “It scares me so much, because all of my family is in Russia — all of them.”

The BEM tailors to its costumers, asking for recommendations so they can widen their stock of Eastern European products.

While the store is mainly Russian, Klitchyk said he hopes to offer more that just Russian and Ukrainian products in the future.

“We don’t want to call ourselves a ‘Russian store’ specifically and only focus on the Russian population,” Klitchyk said. “We want to expand our products for other countries like Lithuania and Bulgaria. That’s why we call ourselves a European Market.”