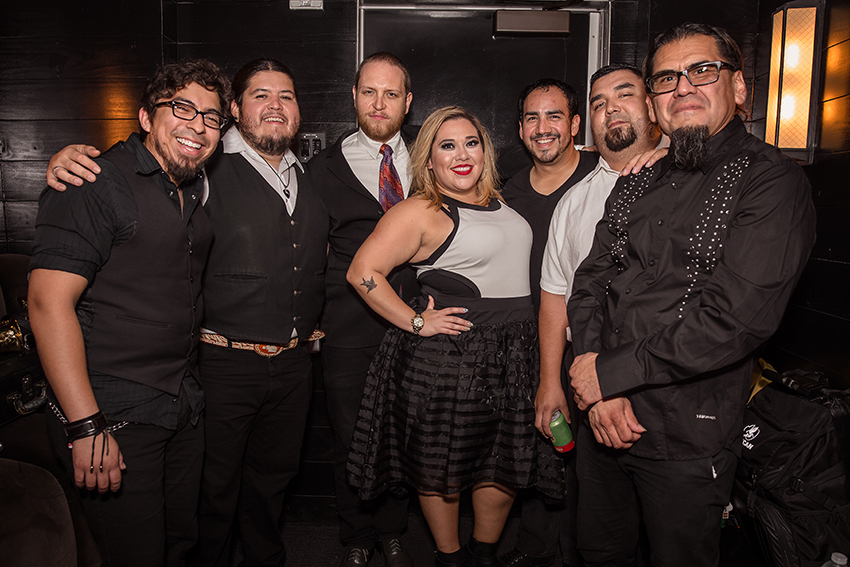 In Stephanie Bergara’s stacks of worn out tapes and CDs, tubes of Sephora’s Always Red lip stain and a wireless mic decorated with carefully placed rhinestones, the memory of Selena Quintanilla lives on.

For two years, Bergara has been the frontwoman of Austin’s first and most popular Selena tribute band, Bidi Bidi Banda. Although the band was born out of a quick performance of staff members before Pachanga Fest in 2014, their next gig was a headlining spot at Formula 1 Fan Fest five months later.

Bergara didn’t start performing until 2014, but her love for Selena has been a part of her life for as long as she can remember.

As a 6-year-old, Bergara sat glued to her television, watching the newly-dubbed “Queen of Tejano” take home “Female Vocalist of the Year” at the 1994 Tejano Music Awards. As Selena took to the stage to perform “Bidi Bidi Bom Bom,” Bergara set her heart on following her footsteps.

“She was the first person I saw on television who had the same skin color as me, who had a last name like mine,” Bergara said. “It meant so much.”

Tejano acts from Selena to Emilio Navaira and Ramon Ayala dominated Bergara’s life. On trips to the grocery store with her mother, she said she would load up on CDs and tapes, learning Spanish as she sang along to the cumbias and corridos.

She wasn’t a native Spanish speaker, but Bergara said the emotions of the music weren’t lost on her.

“There’s not a childhood memory that I have that doesn’t have [Tejano] music playing in the background,” Bergara said. “Those musicians have always been my family. Every time I hear that accordion music or a cumbia, it just takes me back home.”

For a small window of her childhood, Bergara said Selena was the pinnacle of Tejano music. But, when she was 8 years old, her idol’s blossoming career was cut short.

During her after-school choir practice, Bergara’s little brother ran in, alerting her that Selena had passed away.

“It felt like someone in my family had died,” Bergara said. “We grew up with her. She was a pillar of the MexicanAmerican community. She was one of the ones who had made it.”

Bergara and her family were glued to the television again, this time mourning the loss of the Latin pop world’s brightest star.

In the year’s following Selena’s death, Bergara held on to her music. During middle and high school, the songs became the soundtrack to her life, guiding her through heartbreak and teaching her how to become a woman.

But it was one song, the emotional ballad “No Me Queda Mas,” that pushed Bergara to pursue her own musical career.

After Bergara posted an acapella cover of the song on Soundcloud, her aunt found it and played it for the whole family. With the support of her relatives, Bergara said she received the final push she needed to perform.

“It was the first song anyone ever heard me sing,” Bergara said. “Even if I play it a hundred times, it’s always special. After that song, I started pursuing [music].”

While Bergara’s career and her performances with Bidi Bidi Banda are a tribute to Selena’s career, she said she’s not setting out to replace her.

“We go out and perform the songs the way they were recorded,” Bergara said. “The goal is to help these people relive the memories and feelings that the songs bring back.”