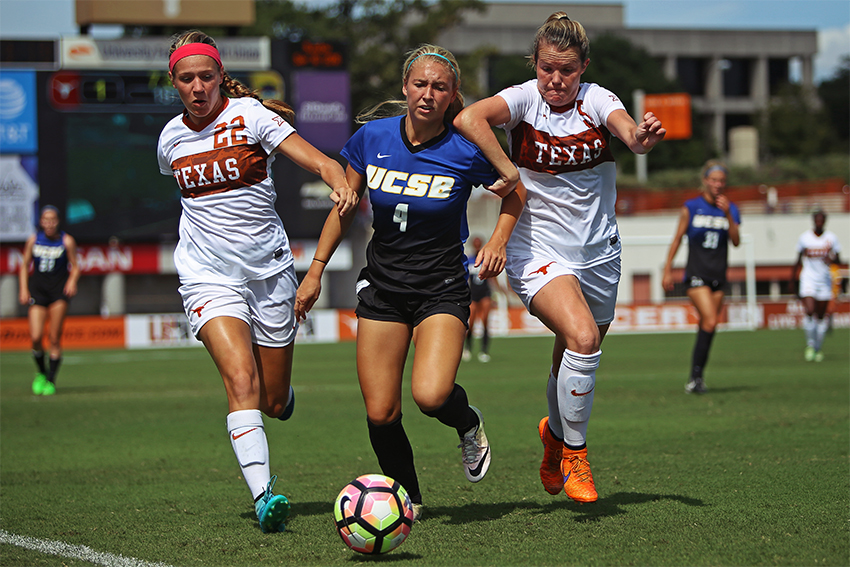 “Mentality” has been the operating word with the Longhorns this season.

In the offseason, head coach Angela Kelly preached to the team that a change in mentality would be vital to the success of this Texas squad.

Now heading into Big 12 play this weekend, the focus on the team’s mentality is as strong as it’s ever been — and the Longhorns are as confident as they’ve ever been, too.

“We’re looking to go out and send a message,” senior midfielder Julia Dyche said. “We feel like we’re a top competitor in the Big 12, and we’re excited to go show that to everyone else.”

The Longhorns (6–3) have won three consecutive matches and are off to their best start since Kelly arrived at Texas in 2012. And statistically, this might be the best team Kelly has ever had on the 40 Acres.

Texas has already scored 19 goals through nine matches. Last year’s team scored only 21 all season. Defensively, the Longhorns have allowed only seven goals and 24 shots on goal.

Still, the Longhorns remain dissatisfied and refuse to get complacent.

“I think everyone knows that if we put in [the work] and we keep pushing, we can achieve great things,” junior defender Monique Iannella said. “But it’s just about
continuing on with the coaching staff’s plans and just performing well on the pitch to get the result.”

Of course, things haven’t always been smooth sailing for Texas this year. The Longhorns were shut out in their season opener against Seattle, lost on a controversial goal against No. 20 California and blew an early 1-0 lead in a loss to Ohio State.

But those three losses were nothing more than learning experiences, according to Dyche.

“I think we learned a lot from those three losses,” Dyche said. “Any loss is an opportunity to get better, and I think we responded well to every loss and tried to change the things that we did wrong.”

Texas picked up arguably its biggest win of the season last Sunday against California-Santa Barbara, who entered the match undefeated. The victory not only gave the Longhorns their third victory in a row, but it marked a sign that the team could beat anyone.

What Texas hopes to achieve is a Big 12 championship and berth in the NCAA tournament. The Longhorns believe they have the depth and team to do so. But an entirely new season starts on the road Friday, where Texas will really have to prove it truly is better than the teams from recent years.

“I think we are well-tested,” Kelly said. “Our out-of-conference schedule has certainly prepared us for anything that we’re going to face. Everybody’s aware that we’re here to win October, November and December. September and August are preparatory for that.”

The Longhorns face Baylor on Friday at 6 p.m. and Oklahoma on Sunday at 1 p.m.