By the numbers: Buechele making a difference through three games 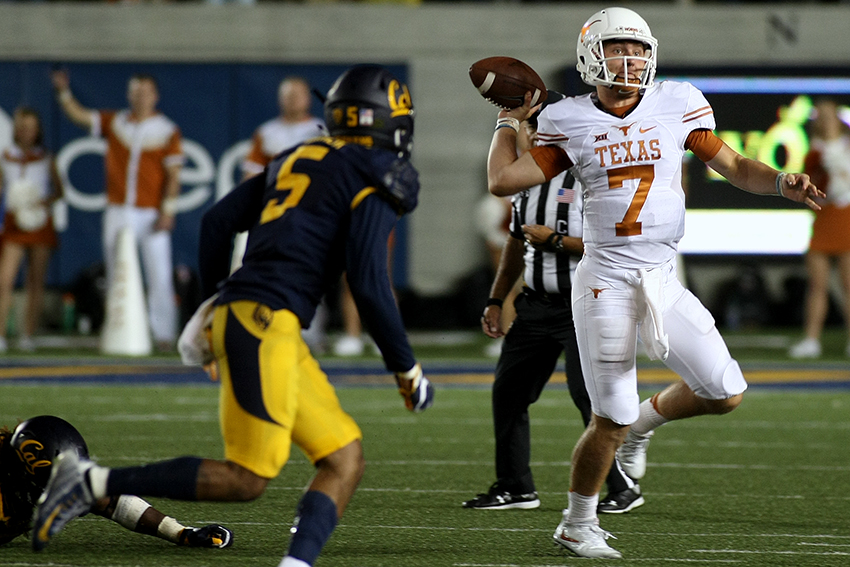 California senior defensive end Devante Wilson delivered a heavy blow to the true freshman in the first quarter of Texas’ loss to the Golden Bears on Sept. 17. Buechele re-entered the game only a quarter later, and Longhorn nation’s gasp turned into a sigh of relief.

The fans recognize that Buechele carries a certain presence and poise they haven’t seen in Austin over the past few years. And head coach Charlie Strong recognizes it too.

“The thing you like about Shane is he has that demeanor about him where he’s so calm,” Strong said. “He has that style of confidence about him. And the way he carries himself, he just makes everybody else around him so much better, because he knows how to handle himself.”

Wilson’s hit didn’t rattle Buechele — he came back to throw a 41-yard touchdown strike to senior receiver Jacorey Warrick one quarter later. The freshman now boasts an average of 240 passing yards per game and has completed 66.3 percent of his passes in the process. He’s tossed seven touchdowns and only two interceptions through the first three games of his career.

Those numbers stack up favorably to Texas’ last two starters through the first three starts of their careers.

Senior quarterback Tyrone Swoopes threw for 196.7 yards per game at 63.7 percent accuracy in his first three games as a sophomore in 2014. He had five touchdowns and one interception as the Longhorns dropped two of those three matchups. Redshirt sophomore Jerrod Heard put up 201 passing yards per game at 58.2 percent in his first three starts in 2015. He threw for two touchdowns and had two interceptions.

The Longhorns took the loss to California, but Buechele still managed to throw for 196 yards and a touchdown. Offensive coordinator Sterlin Gilbert commends Buechele for his veteran-like early season performances, but he said the freshman’s ability to come back from an injury says the most about his toughness.

“He got banged [up] early right there and came back and showed some toughness,” Gilbert said. “[He] came back in the latter part of the game and made some plays down the stretch for us.”

Buechele’s presence is paying big dividends for Texas’ offense early in the season. The team currently averages 262 passing yards per game after throwing for just 146 yards per game last year.

His teammates credit his calm demeanor for his early season impact. And according to Buechele, Longhorn fans will see more of the same
going forward.