Texas holds off No. 8 Kansas in four sets 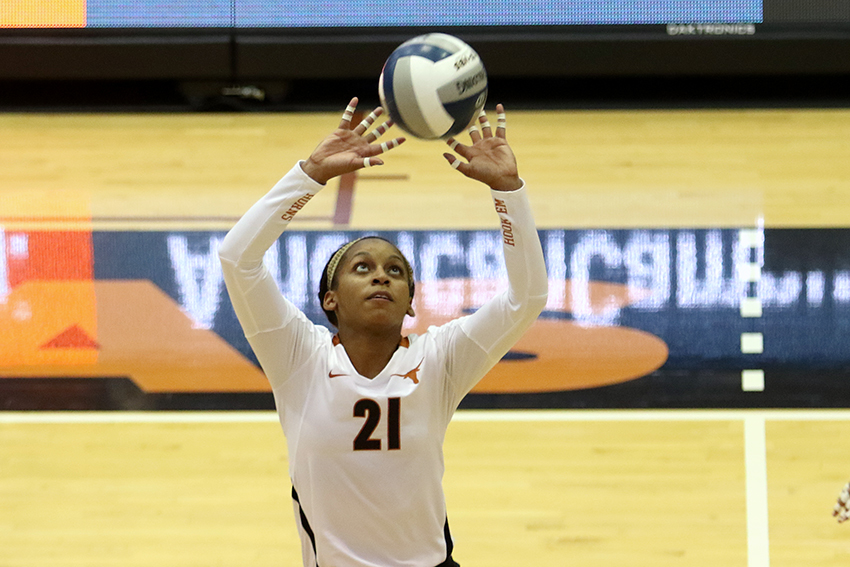 Junior outside hitter Ebony Nwanebu slid across the floor, popping up a ball that looked dead.

The ball veered sideways, heading downward once again until freshman Claire Hahn saved it and pushed it over the net. The action caught Kansas’s front line off guard, sealing a critical point for No. 5 Texas in the first set.

“Kansas is a very good team and obviously ranked,” Nwanebu said. “They’re going to give us their best shot, so we can’t take anything lightly. A win over Kansas is a big night for us.”

The Kansas sidelines were jumping up and down with excitement in the first set. After a 6–6 tie, Kansas pulled ahead of Texas 12–9. Texas took a timeout, but the Jayhawks still managed to extend their lead to 20–15.

However, tips from freshman outside hitter Micaya White and Nwanebu set the Longhorns in motion. After closing the gap to 23–20, Texas fought back to tie the set three times before sealing the win at 27–25.

“When we were down that first set, Chloe pulled us in a huddle and said, ‘We are not losing this first set,’” Nwanebu said.

Texas came out strong in the second set, establishing an early 11–3 lead. Nwanebu and White controlled the outside, while senior setter Chloe Collins stayed consistent with short serves to the front row to make Kansas’s offense scramble. The Jayhawks rallied back within five points of Texas, 16–11, but ultimately failed to catch up. The Longhorns took the second set, 25–16, with White and Nwanebu producing 13 kills each.

Texas started the third set going tit for tat with Kansas. After Kansas pulled ahead and two Texas challenges failed to reverse calls, Texas fell in a 23–16 hole. Kansas then closed the set 25–18.

“We let a lot of easy balls go,” head coach Jerritt Elliott said.  “When a team gets four or five on you it can be tough to win that game. We’ve got to be steady with our
defense. Offensive numbers are good right now, but it gets overwhelming when we are taking swings over and over again and they’re getting first ball tools and digs.”

Texas dominated the fourth set, stemming from an early 9–6 lead. Collins recorded a block with sophomore middle blocker Morgan Johnson to get the crowd fired up. After a Johnson ace, Collins surprised with a setter-kill to throw off Kansas’ defense. Freshman middle hitter Orie Agbaji continued to lead the team in blocks, racking up six total. Kansas tried to rally back, chipping away at an eight-point deficit, but Texas closed the set 25–19.

The victory gives the Longhorns a two-game win streak to start Big 12 play before beginning a two-game road trip this week.

Texas heads to Oklahoma on Wednesday and Kansas State on Saturday.

“Whether we’re home or away we keep the same intensity,” Nwanebu said, “I feel like we should just do our jobs.”